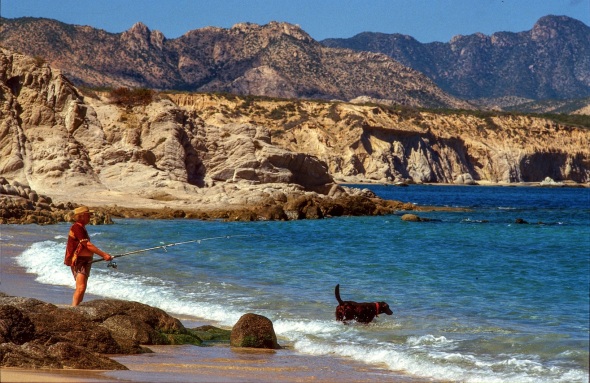 Untouched and pristine North America’s only coral reef was a personal adventure in the 1980’s.

The first time I visited Cabo Pulmo I drove right past it. True it’s unique beauty lies beneath the waves in this enormous bay which is quite shallow and nurtures young life and marine treasures. The view from the road was the same view that I had enjoyed for the past 100 miles since leaving La Paz so when I drove past this faint truck path disappearing into the sand and dunes who knew it would led us to a farmhouse and a gate and the most outrageous campsite on the Baja.

Over the years I visited three or four times each time I was more excited and pushed out from the shoreline, further and further. Once we rented tanks in La Paz and diving at Cabo Pulmo in 20′-45′ of water our tanks lasted forever. Free diving allowed you to get a better overall view but the tanks made things more personal, the colors, the life and the over whelming size of this undersea garden which is unique to the Sea of Cortez because of the temperate weather, the shallow cove captures the natural solar power from the sun and never dips beneath 70 degrees. In those days I tried to know something about the marine biology of the area, so I had some idea of what I was looking at and what not to touch. Cabo Pulmo has one very curious affect on one resident, the Gineafowl Puffer, which is black with white spots all over its body. Apparently, at one moment in the Gineafowl Puffer life, they have a golden moment, literally a golden phase, where their black and white spots disappear and they turn gold. The reef is a protective place where they can dress outlandishly and not get harvested for their pretty hue. Camping on the beach allowed the early riser to watch the sun climb out of the Sea of Cortez lighting up the world as it rose.

“The coral reefs in Pulmo Bay consist of eight long bars of igneous rock, upon which coral and other marine flora and fauna grow.;

All eight of these bars extend out from the beach and are easily visible, resembling rocky dikes that project from the sand and continue into the sea. Marine life around the coral reefs include; the White-banded Angelfish, Moray eels, lobster, puffer fish, Yellowtail, Surgeon fish, Pork fish, Butterfly fish, Parrott fish, Moorish Idols, Hawk fish and blennies. Along the deeper reefs, schools of grunts with larger game fish and large grouper appear, as well as a greater abundance of gorgonians and sea fans,” this is the picture painted by the “BAJA CALIFORNIA DIVER’S GUIDE, which guided me to Cabo Pulmo the first time back in the 1980’s. The outer Cabo Pulmo reef lies two miles from the point and features 60′-70’dives into caves and crevices covering with rich layers of sea fans. http://www.cabopulmopark.com/

Since I last visited this sleepy cove, the Cabo Pulmo Beach Resort, has grown up around a small, rustic, romantic village of palm-thatched bungalows that are located right in front of the National Marine Park of Cabo Pulmo just 60 miles up the Sea of Cortez from Cabo San Lucas on the gulf side. Cabo Pulmo is a quiet village that has no salesmen or trinket sales to bother you, no paragliders or noisy jet skis, you can walk for miles on the beach and not see anyone at times. The village of Cabo Pulmo has it’s own well and the quality of water surpasses most water found elsewhere on the Baja Peninsula.

The village is off the grid and relays totally on its own solar power.

Cabo Pulmo Beach Resort sells lots on the East Cape of Baja California Sur, Mexico all with panoramic views of the Sea of Cortez, desert and mountains. Lots are said to sell for prices ranging from $39K to $200K and taxes are about $100 per year!

Development along the East Cape Road started a long time ago. But development now threatens one of the Treasures of the BAJA.

A new 23,000 room hotel complex called “Cabo Dorado”, has been proposed for Cabo Pulmo which is strikingly similar to two previously canceled projects that were proposed for 3,769 hectares in the exact same location as the other. These projects would change the current landscape entirely, Los Pericúes wanted to include nine hotel lots (eight of which were proposed as unobstructed beach front) and 6,650 residential units built on two 18-hole golf courses.

Now for the third time, the threat of massive coastal tourism and real-estate development has returned to Cabo Pulmo National Park, one of the world’s most robust marine reserves and home to a critically important coral reef system. The new mega-resort project, now called “Cabo Dorado”, raises the specter that Cabo Pulmo’s fragile coral reef and the local community’s fresh water supply could once more be at risk.

Here’s what we know so far about Cabo Dorado:

The 3,770 hectare project is proposed on the same lands – just north of and adjacent to the Cabo Pulmo reserve – where first Cabo Cabo Cortés and later Los Pericúes were also proposed.

This new mega-resort would be built in five phases at a cost of at least 3.6 billion dollars. The project would have 22,500 rooms, nine hotels and more than 6,000 residences. There would be two golf courses, sports facilities, beach clubs, a 14 kilometer aqueduct, a new airstrip on the site but a project of this scale and scope would also generate 711,900 kilograms of waste per day and could extract up to 4.8 million cubic meters of water from the local aquifer of this arid, desert region. Apart from the proximity to the fragile Cabo Pulmo coral reef and the marine life it supports, the proposed project site is home to 26 species considered at risk under Mexican law, including endemic plant species and endangered sea turtles.

The sheer scale of the proposal has brought concern about the Cabo Pulmo reserve, a gem internationally recognized and treasured by both the UNESCO World Heritage Sites and it was designated a Ramsar Wetland of International Importance. Representatives from both of these international organizations after a visit recommended that Mexico restrict future large-scale development in the vicinity of the park to avoid the risk of damaged habitat. 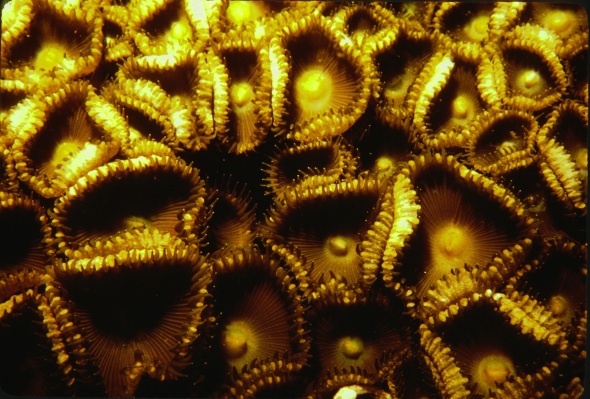 Fortunately Cabo Cortés was eventually halted by former President Calderón in June 2012, but it should never have progressed as far as it did. Now, with a new project proposed near Cabo Pulmo National Park it is absolutely critical for Mexican authorities to ensure that history does not repeat itself. A project that would endanger the fragile marine and terrestrial ecosystems near Cabo Pulmo and the neighboring communities must not be allowed to move forward as Cabo Cortés did. A bad project that threatens one of the country’s and the world’s crown jewels must simply not get the green light – no matter how many times or who proposes it.

This petition is about saving God’s treasures on this Earth. I have visited Cabo Pulmo and I have dove into this bay and can testify how beautiful all of this reef can be, with the schools of colorful juveniles and huge schools of jacks, grunts and barracuda. Proposed development will only destroy the reason people want to go there. To enjoy the pristine beauty unique to the Sea of Cortez (Gulf of California) we need to fight to save it now.

That’s why I created a petition to Enrique Peña Nieto, President of Mexico, which says:

“Cabo Pulmo reserve is an internationally recognized treasure it is both a UNESCO World Heritage Site and designated a Ramsar Wetland of International Importance. As North America’s only Coral Reef it has been recommended that Mexico restrict future large-scale developments in the vicinity of the park to avoid the risk of ruining what nature has built.”

Thanks! Pass this along to like-minded individuals….

This entry was posted on May 9, 2014 by PK WEIS. It was filed under Uncategorized .