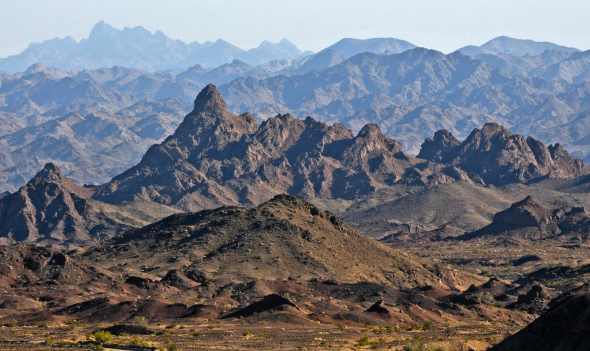 More than 38,000 acres are included in the Picacho Wildreness

In the American South West there are many “Picachos” or big peaks as translated in Spanish, Arizonans have long appreciated Picacho Peak, that marked the most western battle of the Civil War and more than halfway mark between Phoenix and Tucson. The California Little Picacho Wilderness and Recreation area is less well known, winter camping is great there. California fisherman, hunters, hikers and campers all know Picacho Peak on the Colorado River, a standout at 1947′, and a great spot for outdoor recreation only a three hour drive from San Diego. It stands about 30 miles north of Yuma on dirt roads first traveled in 1780 by Spanish gold miners who began dry placer gold claims there because of the dry conditions which exceed 100 plus degrees mid-summer, and lack of water. Miners would shovel sand and gravel on a blanket, shake it until only the heavier gold remained. Soon a Picacho town site sprung up with 2500 residents served by three stores, several saloons, three elementary schools and it was connected by the Colorado River with paddle wheelers who stopped there for wood to fuel their steam boilers. The mine payroll peaked at 700 men. Poor ore quality and mine accidents ended most organized efforts there by around 1910. That town now lies behind the Imperial Dam at 33°01′23″N 114°36′40″W flooding what was left of the original townsite in 1938. The Dam ended cheap ore transport by boat which was the last nail in Picacho’s industrial coffin. 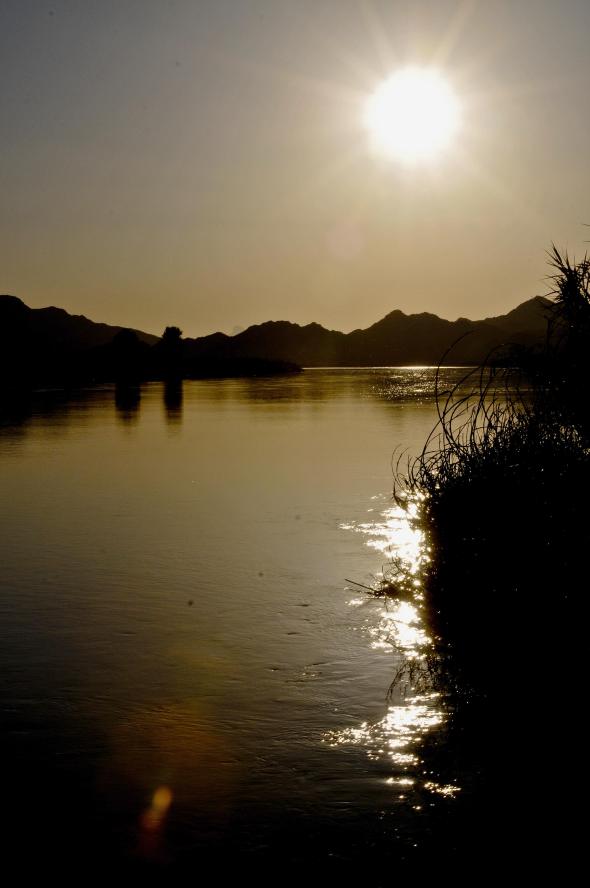 Today Picacho is a State Park on the lower Colorado River on the eastern border of California, offering a diverse scenery, with cactus, burros, bighorn sheep and thousands of waterfowl. Take the mile dirt road north from Winterhaven, off Interstate 8 West of Yuma. The road is paved only a few miles, then becomes graded dirt. The last 18 miles is over a desert road that is passable for passenger cars and motor homes. In the summer months thunderstorms can cause flash flooding in the washes, making sections of the road impassable. Check weather forecasts before traveling into this region of the desert. 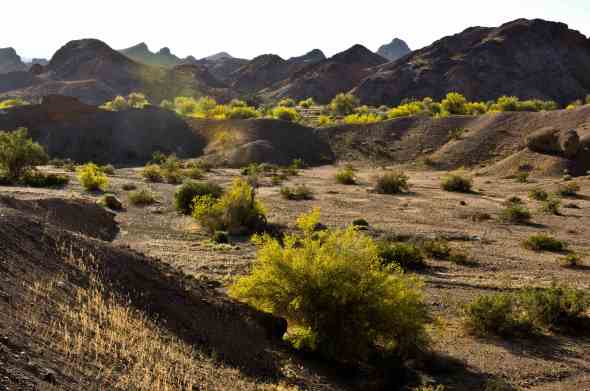 Flash flooding area next to the Picacho roadside ....

Fishing is a favorite activity for many Arizona and California residents and visitors. Anglers that are 14 years old or older will require a fishing license. If you plan to fish the Colorado River waters from any sort of boat or float, or you fish from the California banks of the river, you will also need a Colorado River Stamp. See Arizona Game and Fish for rules and to purchase licenses online. 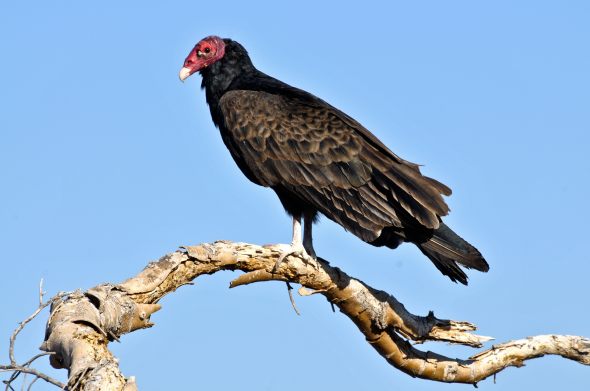 Little Picacho is a hot spot in the summer and this bird and his buddies look for the unprepared.

The Little Picacho Wilderness is a 38,214-acre wilderness area under the jurisdiction of the Bureau of Land Management and is a southeast extension of the Chocolate Mountains adjacent to the Colorado River. The wilderness is home to the Picacho wild horse herd, that roams the northwestern part of the wilderness, as do wild burro, desert tortoise, the spotted bat and about 25 desert bighorn sheep.

Keep your dog away from these docile appearing creatures. They have spent a lifetime repeling coyotes and will kick the life from a domestic animal.

General Things to Consider When Planning a Trip to Any Wilderness 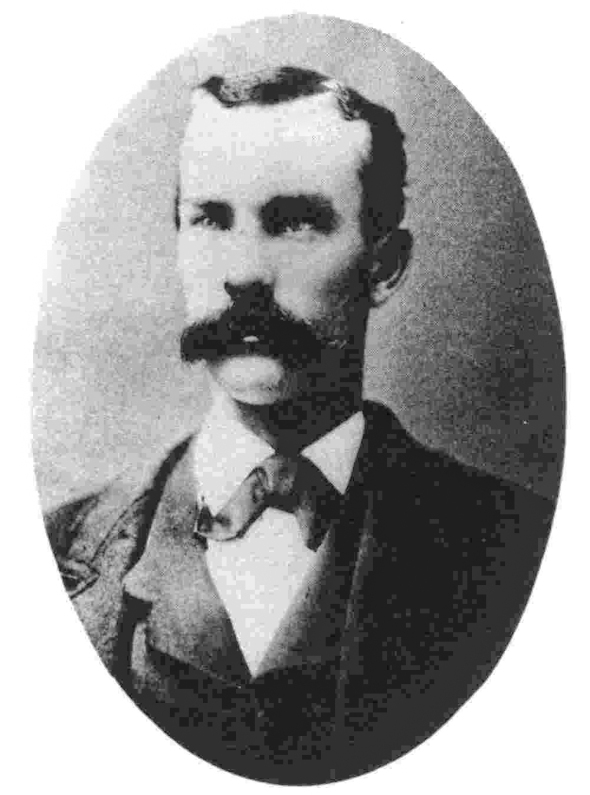 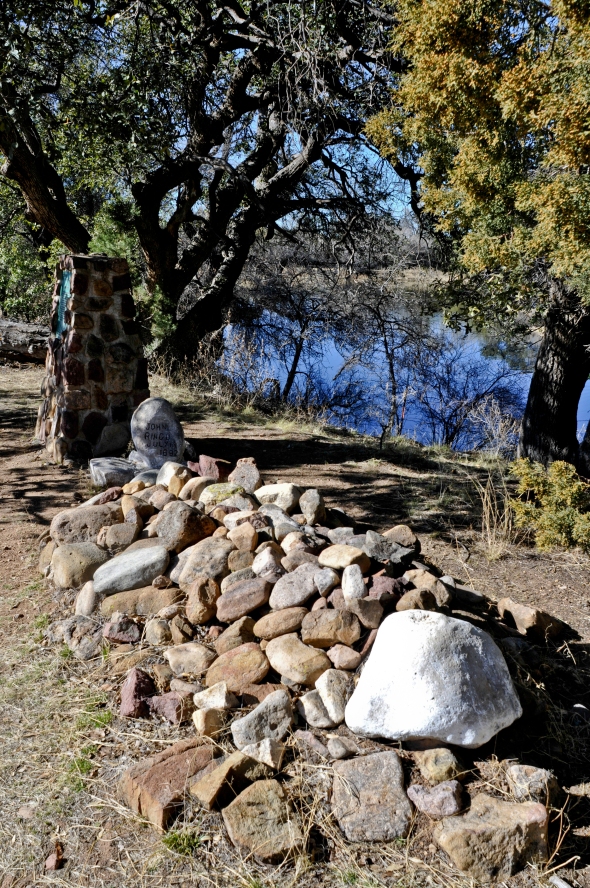 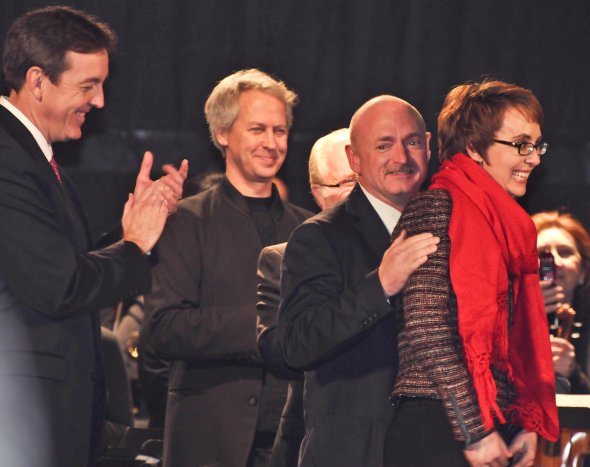 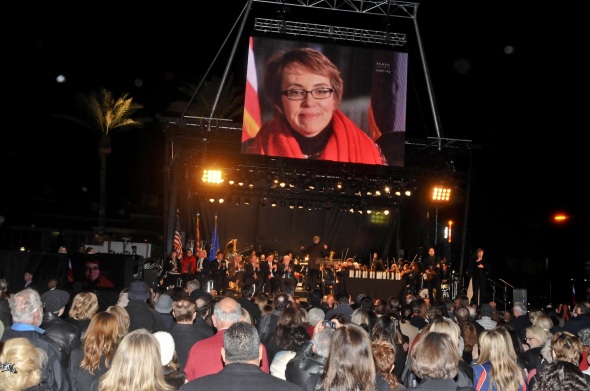 A smiling Gabby Giffords looks over the thousands of friends and supporters who turned out to greet Gabby and welcome her home.

GABBIE GIFFORDS CAME HOME TONIGHT. Gabby climbed a stage and waved to friends, fans and thousands of supporters who turned out on a cool desert evening to see the night lite up by her smile. They were not disappointed. Gabby Giffords did just that and everybody loved it. The Candlelight Ceremony held on the University of Arizona Mall began by lighting a candle for each shooting victim and then thousands of Tucsonans waved glow sticks as a choir entertained and soon the Congress women’s favorite band Calexico took the stage and gave the glow sticks a south of the border beat. Sunday night’s ceremony concluded several weeks of memorials, the dedication of the Gabe Zimmerman Trails in Davidson Canyon was Saturday and earlier Sunday afternoon there was a memorial ceremony at Centennial Hall to remember each of the six deaths. The Fund for Civility, Respect and Understanding held the REFLECTIONS Ceremony . 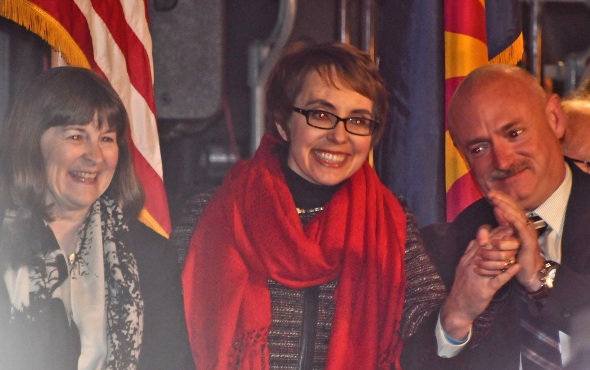 Gabby Giffords rock to the South of the Border Beat as glo stiks wave back and forth on the dark UA mall.

Family and Friends of the shooting victims lite candles until 19 were lighted.

Ron Barber, shooting victim and founder of the Fund for Civility and Respect and Und

Family and Friends of the shooting victims lite candles until 19 were lighted.

Gabby Giffords rock to the South of the Border Beat as glo stiks wave back and forth on the dark UA mall.

Ron Barber, shooting victim and founder of the Fund for Civility and Respect and Understanding organized the Reflections Ceremony at Centennial Hall.