THE CIVIL WAR IN THE SOUTHWEST: A GREAT SHOW, GREAT BATTLES, GREAT RE-ENACTERS, GREAT TIME TO CLEAN UP THE BACKGROUND, ANNOYING CAR ALARMS !

Few people have watched the Civil War in the SouthWest as many times as I have. It is a great show and it celebrates the small but important role the southwest played in the Great American Civil War. Over the years, the quality of the troops have excelled and their numbers have grown. All that equipment and period gear, they buy and donate their efforts to make this incredible performance come together each year in March. The quality of cannon now on the field, all privately owned, this year fell shy of ten, far beyond performances in the past. More than 2,000 people turnout each day to wander through the tent village visiting with folks living in the past. They watch church sermons, yesteryear entertainment, troops drill and snoop through the regimental camp inspecting the lifestyle of blue and grey troops on the front lines of the worst war in America. You can buy a ball cap or a confederates cap, pick whatever side you wish, cheer for your heroes, however, the smart money is on the boys in gray, the Johnny Rebs and their rebel yell, just saying. 2014 performance like every March, Picacho Peak State Park hosts a re-enactment of the Civil War battles of Arizona and New Mexico, including the battle of Picacho Pass. The re-enactments now have grown so large that many more participants tend to be involved than took part in the actual engagements, and include infantry units and artillery as well as cavalry. To add to the excitment, flash pans down field explode to add to the feel of combat and give the cannon fire a sense of completion and reality.

This year, cannon fire set off a car alarm in the middle of the battle, it screamed and annoyed for seemingly endless period of time. Picacho State Park has grown a lot over the years, they have expanded their campground which now wraps around the battle field, so everyone gets recreational vehicles in all their battle pictures. 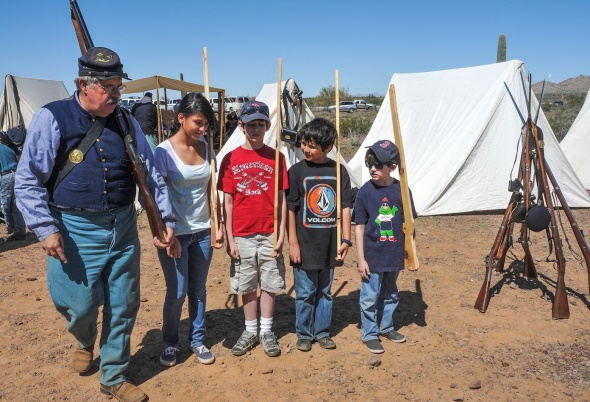 March is also Picacho peak season for visitors, cause in two months, few if anyone will be there. But maybe for the weekend of the battle perhaps closing off that area and during the battle it should be closed to spectators. Encircling the battle with spectators really takes away from the ambiance’ everyone has worked so hard to achieve.

Young re-enactors have really added a spark to the performance, their ad lib mid-battle give the real feel of lead flying, their numbers are on the rise and this battle will only get bigger and the space needed greater. Right now battles are fought on a dog leg so the cannon isn’t fired at the target, but we know what they mean–right! 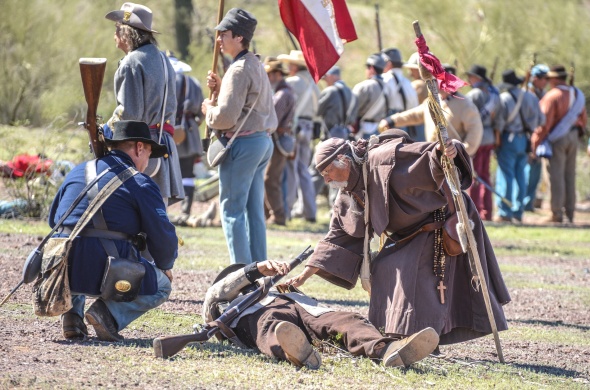 Presently the crowd in pushing out in the middle and to see both sides of the battle folks have to walk back and forth, photographers have to jockey for position, but in the days when everyone is a photographer, there is usually someone in your frame. Professional photographers in such a setting realize that they have a responsibility not to get in the middle of everyone’s photograph, folks videoing with their phones never seem to think about it. The safety officers do a good job of keeping the cavalry from running through the spectators and few injuries come from horses or gunfire, perhaps sunburn and scrapped knees on young ones running when they shouldn’t. Why not more shade for folks spending a whole day in the sun, lots of older folks, many would benefit to bring their own chairs, sun lotion, cool drinks and shade. 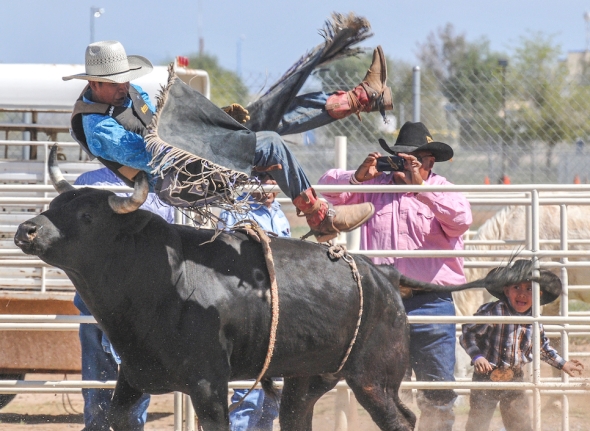 It was family time around the Rodeo arena Friday when 200 participants turned out
for the Gila River Indian Communities’ annual Junior Rodeo sponsored by the Mul-Chu-Tha
Festival and Rodeo in Sacaton, Arizona. Everything is scaled down in the Junior Rodeo for the
next generation of Cowgirls and Cowboys, there are contests for ages six through seventeen.
Stick horse racing is introduced early as five year olds push their steeds through their paces around
the red pylons, there were a few falls, some tears, but everyone a winner. 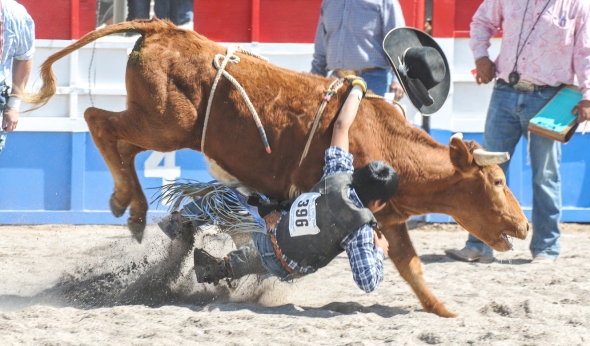 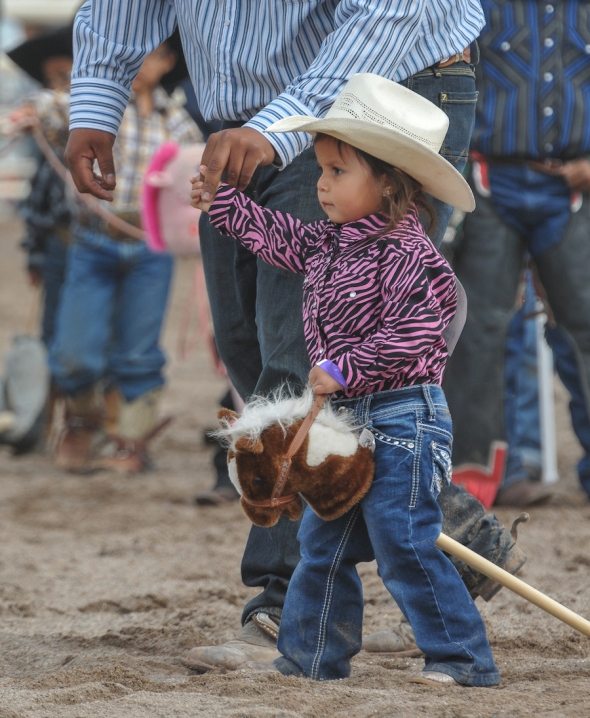 Barrell racing was again a question of scale, with thirty-five pound cowgirls, pushing these 900 pound horses through their route. Still the mutton busting capture your heart and imagination. The gate would open and these bags of wool on legs come running out and mostly you can’t see the rider buried in all the wool, until they rolled off onto the ground. Many just lied there unmoving, and mothers would rush out but mostly they shook it off, with a few tears, but many took it in stride and moved on.

Junior Rodeos
are made up of all the Indian rodeo talents in the State of Arizona the same folks hit many the
same rodeos coming in from Whiteriver, Windowrock, Sells, or San Carlos, Arizona representing
the Apache, Navajo and O’odham Tribes like the Tohono, PeePosh, Akimel, Maricopa are all Piman
tribes. These talented contestants get their start at Junior Rodeos and Sacaton’s rodeo gave all the
little guys and gals all the time they needed and encouraged everyone to participate. Few showed
but a few tears were shed over the steer riding. All riders wear a protective vest which one steer
was able to hook and twirl his rider over it’s head on its horn. That rider was a bit dizzy. There were a
few hard falls, but no injuries, there was however an arm cast or two in the crowd. There were some
very professional riders who scored well and finished lst, 2nd, 3rd, others got their share of hard knocks
and some great experience. These guys and gals will work for the next year to hone these cowboy skills and next year they will be a little bigger and the lasso a little smaller and a little easier to throw….. 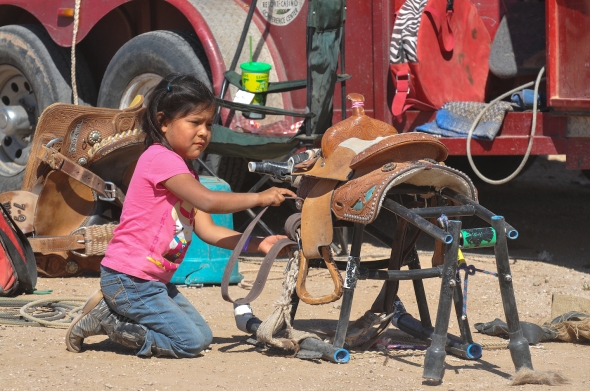