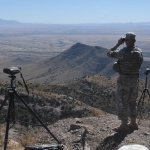 “NATIONAL GUARD IN CAMOUFLAGE” />
In the past 24 Hours I have driven halfway across Arizona following the US-Mexico Border photographing “the Wall” and looking for the National Guard–reportedly there are 1200 guardsmen working in support of Homeland Security, half of those are watching cameras, the other half are in the field!
I’m climbing out of my Xterra and Chester jumps out to stretch after the long dusty, rocky, climb up Montezuma Pass to this scenic viewpoint where I scan the horizon miles distant deep into Mexico and Southern Arizona. “Can I pet your dog”? I turn and there is the National Guard marching right toward me, “Sure, Chester doesn’t mind,” drawing them in closer. In the parking lot, is a ford 450 with a funny looking gizmo spinning 360 and the windows are blacked out. “Are you with this I ask”? Naw, we’re bivouac up the hill keeping an eye on the border” I sure miss my golden”, he adds stroking Chester who is patiently putting up with the glib soldier. “we’re 4-man teams, 24 hour shifts staying at Ft Huachuca 22 miles away when they aren’t sitting on a rock overlooking the US – Mexico Border. They scan the terrain, looking for UIA’s (undocumented illegal aliens) or smugglers, if they see something, they call the Border Patrol. How good are these guys coming in I ask, “Extremely good”, he retorts three times in succession. “I saw ll guys slipping past 1800 meters beneath me, called in BP and had my binocs on them in a draw, watched them the whole time, maybe they heard us but I directed BP in and they had slipped away, “they are there-I saw them”, nope says BP, “not anymore”. “They are extremely good”, he repeats, “another team saw 38 crossing”, they know we are here “we’re just a deterrent”, he adds. “We’ll be here as long as the politicans want us here.” “They are paying me $5,000 a month to sit on this rock and watch Mexico”, we can stay as long as they want.
The gizmo on the Ford 450 is still spinning and I ask, does it scan the entire valley and point to a distant ridge 5-6 miles away and ask if that ridge is in play. “Absolutely, he says, “it’s like in Preditor”, he says referring to the scifi flick where the alien has heat-seeking thermal signature vision. These guys (Homeland Security) get a lot of training how to read thermal signatures, how to avoid cows, rocks heating up! We (the guard outpost) have a hand-held thermal binco says the guardsman. That thing, (the gizmo on the 450) is 3 and a half times stronger than ours. “Can you see faces I ask” “Kinda, he says but it is the preditor-thing, they are kinda hard to make out.” Anyway, we gotta go. Needed a puppy-fix we gonna get coffee. “Can I checkout your outpost?” Sure the guard says, it’s a public hiking trail. You will see the camouflage.
They’re gone and I stick Chester in the car and head up the rocky, exposed trail up to Coronado Peak a half mile to the summit. At the top, 6575’, there is a bench and shelter and the wind is just whipping anything in its path, down below on a hillside perch are two more guardsmen. I make several photos from a distance and finally I announced myself and a head pops out of the camo. “Mind if I checkout your outpost”, closing the distance between myself and the two dumb struck soldiers. “Well, we’re not really open to the public” one guardman offers. “Do I look like the public?,” I ask as I snap a few frames, the other guardsman busies himself with picking up two M-16 automatic rifles with clips engaged and moving them out of sight in the camo. The other guard man, flustered, turns toward Mexico and looks through his bincos and I get my photo. The wind is still flaying in gusts, under the camo are packs, two cots, a water jug–pretty Spartan I think. “Well, I can see you folks will be more comfortable if I wasn’t here…so I’ll just move along.” “THANK YOU”, both guard men say in unison. They were all perfect gentlemen.

From Flagstaff to the North Rim of the Grand Canyon the color shift has begun, first with the Aspen, so prominent now-days because it gets the first foothold after forest fires and followed in the Flagstaff Walnut Canyon area with yellowing Oaks. While tempid temperatures have quieted the shift, it is advancing slowly and may yet reach an ultimate peak. However Northern Arizona is forecast for showers and frequently downpours and accompanying winds knock off the final coat. Southern Arizona is still several weeks off, on an average I find, that the final weekend of October is usually the best to get out and look around. Watch out for the deer hunters, they show up in great numbers at that time, and frequently take all the campsites.

“You should have been here Friday, the place looked like a tornado hit it!” My friend Joe Powell has a firm grip on the obvious and continues. “You should have been here Saturday and seen those 500 Latter Day Saint Volunteers who swooped into the devastated Flagstaff Meadows subdivision to help several of their own church members and their neighbors. Today is Tuesday and last Wednesday at least one tornado dropped from the sky and swept right down Bellemont Springs Drive blowing out all the windows and garage doors and hitting four homes at the end of the street head on and ripped off their roofs. No one was seriously injured, more 200 homes were damaged, forty were uninhabitable. Today Bellemont Springs is choked with repair trucks, dumpsters, insurance adjusters and the American Red Cross and security guards keep an eye on everyone and everything. On the other side of I-40 ten miles west of Flagstaff, Arizona on a rail line running through the Navajo Army Depot 30 Santa Fe railroad cars were derailed and rolled off the tracks. The hundred mile an hour winds also tossed idling semi trucks on their sides today work crews are trying to repair the rail bed and to right some of the derailment. “Not a soul was injured” insisted Powell, a Williams resident

who is helping out with residents tearing out the bad and replacing the good. Joe’s not really for hire, he just does it to salvage some supplies to build a storage shelter at home. Someone gave him a banged up BBQ, he says he will fix it and give it to a friend, today I’m his friend and he takes me around the corner of a home he is working on to see the 12′ boat foot jammed into the gable of the home. “Isn’t that remarkable!”, we both mouth in unison. “These folks should get down on their knees and give thanks” says Joe. Minutes before the first tornado in Bellemont touched down, Jeff Cox was standing in his garage, his children nestled in bed. Rain and hail pounded hard against the windows and a fierce wind made it look like houses were swaying.Then Cox heard a deafening sound and ducked beneath a trailer when the tornado struck, it tore off the roof of nearly his entire home and throwing it into the nearby forest. The Cox home was at the end of Bellemont Springs Drive and the tornado went right through it and exploded the four homes surrounding it. In the driveway of ground zero lies a “Camping World” sign in fair condition but almost two miles from its perch on the other side of i-40 where the RV business suffered huge losses as much of the inventory was slam banged onto the stores’ parking lot and swept into a pile, the business was not open today. This storm continued into Nevada leaving record rainfall and into California bring heavy snow in the High Sierra. Tornados are rare in Arizona and while the state averages four twisters a year rarely do they all come at once.

Last Wednesday four or more Tornados slammed into Northern Arizona while I was driving from Tucson to the North Rim of the Grand Canyon, I had left Tucson 6am and was just 30 miles from Flagstaff when I heard a radio severe weather warning advising everyone to be on the lookout for funnel clouds until 11am. Around noon, another twister was reported off 1-17 about where I heard the first reports. Apparently around 5:30 am two f1 tornados hit Bellemont, Az with more than a 100 mph winds ripping off roofs, rolling semis trying to sit out the storm and then derailed a freight train, damaging 200 homes before moving north toward Flagstaff. This tornado or another later dropped suddenly into the forest west of Flagstaff cutting a mile-long path through the forest, across AzHwy 180 and eventually mowing down 250-300 fir and aspens. Many of these trees were 40′-50′ in height, some were topped, others snapped at the base, even more were pulled from the ground–roots and all. While there were no serious injuries most folks in this neck of woods won’t soon forget the Day of the Tornados.

A GRAND CANYON VIEW: WILL FIST FIGHTS BREAK OUT! WHERE HAS THE LOVE GONE ?