Where ever hard rock miners scratched the Arizona soil, they found mineral wealth, like gold, silver and copper, now-days low grade rare earths are needed for plasma TV’s and the demand for minerals, right now, is roaring. The insatiable appetite of China and the entire Pacific Rim has Arizona Copper Mines working hard to extract low grade ores for big dollar returns, jobs are being created and the trickle down economy will benefit us all. The first copper mine creation in 65 years happened in Safford, Arizona. Rosemont Mine wants to start up in the foothills of the Santa Rita Mountains and its creation is extremely controversial. “It’s the environmentalists” said Roger Stokes who leads Mine Tours for ASARCO Discovery Center in Sahuarita, Az. Stokes leds tours of snowbirds and tourists to viewpoints, to the crusher facilities and educates them with facts and figures about copper mining.

Many prefer this view to that of the Grand Canyon say tour leaders at the ASARCO Mineral Discovery Center six miles south of Green Valley, Az

Stokes meets hundreds of people who appreciate the awe, the scale and the grand color which the setting sun brings out of the wall of the open pit. Some folks say it is almost as beautiful as the Grand Canyon says Stokes of the ASARCO Pit whose 100 plus years of mining has left a hole 2 miles across by 1.75 mile and a half mile deep. The tailing stretch for almost twenty miles.

Next spot that will be completely covered by copper mine tailing.

“Pecans use lots more water than we do!”, offers Stokes, aware of the ever present push and pull of politics in Southern Arizona. It is no secret Farmer’s Investment Co.(Fico) is opposing both a new pipeline from ASARCO’s CAP tap to the proposed Rosemont Mine. Pecan groves are among the largest water users in the area, largest Pecan Orchard in the United States and locals says the region is undergoing notable ground subsidence due to the pumping of groundwater. Estimates suggest a mine the size of ASARCO’s Mission Mine and the proposed Rosemont Mine would both require the water needed for a town of 25,000-30,000 people.

Right next to the ASARCO Mine which has held water rights since 1898.

The Federal Bureau Of Reclamation concluded that “plans for taking and using the CAP entitlement will not result in significant environmental impacts to the Green Valley/Sahuarita area, Upper Santa Cruz Sub basin of the Tucson Basin Aquifer, or the human environment in the vicinity.” As long as the CAP delivers water to Southern Arizona, the mines have been promised water.

Aerial view of one of three southern Arizona Open Pit Copper Mines, this is the ASARCO Mission Mine

The Mission Mine dates back to the 1898 Mineral Hill Mine which grandfathers water rights for this ever-increasing footprint of a copper mine. The proposed Resolution Mine in Superior plans to use CAP Water, as does the proposed Rosemont Mine in the Santa Rita foothills near Tucson. One theory is the pipeline from Pima Mine Road to Rosemont would be paid by Rosemont Mine owners Augusta Resources, another possibility is that it will be paid for by the next 25,000 residents who move to the valley and hook up, Green Valley Water will simply pass the cost along to new customers.

Lots of ore must be moved, crushed and separated for pure copper ore to be made.

Spinning cages with ball bearing that wear down the ore to small pure concentrations.

The ASARCO Pit is pure efficiency, everything is hooked to the grid. It produces about 1000 jobs. The trucks, crusher, tumblers all run on electricity, the monthly Tucson Electric Power bill amounts to about $1 Million. They use pine oil to separate copper and silver during the floatation process before pouring off the waste and adding to the miles and miles of tailing. The tumblers begin with boulders up to 5 feet, mixed with 8 inch steel balls, and reduced until mixed with 3 inch steel balls, more tumbling, until a 28 per cent pure copper powder is produced. Ten pounds of 28% pure copper ore is produced from one ton of copper ore and ASARCO produces 130,000 tons of copper a year.

Ten pounds of 28per cent pure copper ore comes from a ton of raw rock...

Twenty five trucks haul 28% pure ore every day 90 miles north to Hayden, AZ Smelter where other mines also ship their concentrated ore and have for more than a 100 years-smelted ore into 99% pure 750 pound anode which is then shipped to Amarillo where a refinery takes all the 99% pure ore and takes it to 99.999% purity making it electrically conductive. This process was once handled by a century old smelter in El Paso, Texas has now shut down and the courts have negotiated a $50 billion plus cleanup required of ASARCO.

For Mine Tours and gift shop 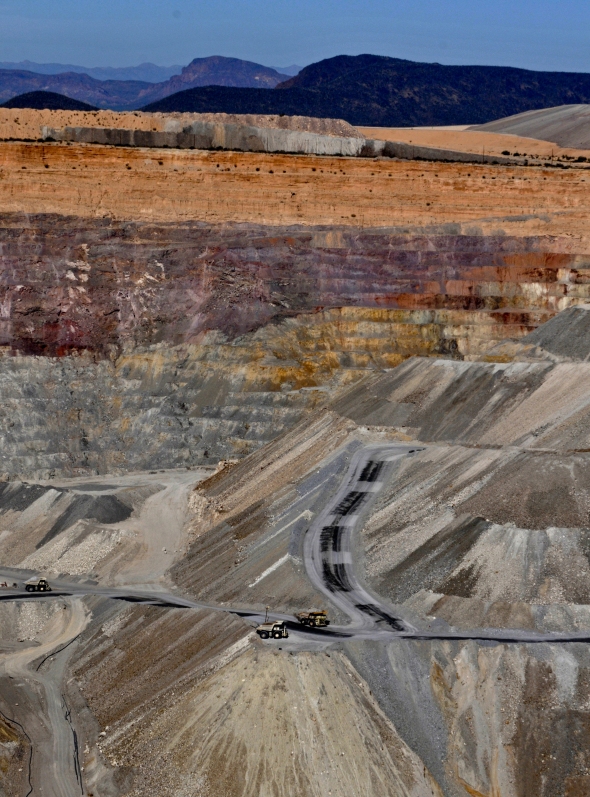