Children learn important lessons about the destructive nature of water running loose after storms in the desert. 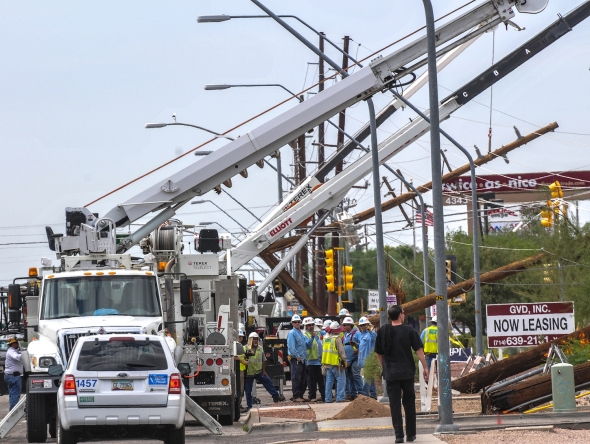 Power has been restored to all of the 20,000 folks left without cooling in the desert after the violent storm

It was a dark and stormy afternoon, more than 1000 lightning strikes were recorded when two brief but fierce storms blew through Tucson, the storms downed power lines and trees, produced flash flooding and prompted several swift-water rescues. Roads were closed for weeks following the 2 1/2 inches of rain that fell in 90 minutes all over Tucson. Hail as large as 1 inch in diameter fell in midtown, wind gusts reached 60 mph and Tucson Electric Power Co. crews worked overnight to restore power to about 20,000 customers in the Tucson area and 1,800 in Marana. Six power poles were left leaning or by Tucson Mall, one smashed the legendary golden arches sign at McDonald’s 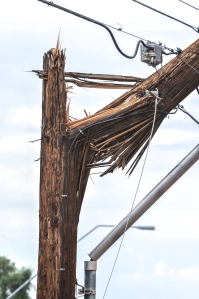 and eight power poles were down along Tangerine Road in Marana. The hardest-hit area was northwest Tucson, which got 1 1/2 to 2 1/4 inches of rain. The southwest side received between 1 and 2 inches of rainfall. Tucson Mall’s roof itself was reportedly damaged, but the extent was unreported. Law enforcement and firefighters responded to multiple calls of motorists in washes, one submerged vehicle at East River Road and North First Avenue. Officials with the Tucson Fire Department fielded 868 calls in a four-hour period Sunday. The Northwest Fire District dispatched firefighters to two swift-water rescues at a wash and a flooded intersection. No one was injured.

I lived next to this wash for 35 years and I have never seen it this deep before.

Kids play in the culvert that is fed from the Carmack Wash behind my house.

The Sunny South Western United States, is on the northern periphery of the North American Monsoon. Monsoon winds in the Southwest shift from a prevailing westerly or northwesterly direction in the winter and spring to a more southerly direction in the summer. The moisture comes from two sources: Southeast flow around high pressure in the upper atmosphere helps to transport middle and high-level moisture into the Southwest all the way from the Gulf of Mexico. Surface moisture arrives on a southerly flow out of the Gulf of California and the eastern Pacific Ocean. Combine these two moisture sources with daytime heating and upper disturbances and you have the ingredients for thunderstorms with heavy down pours, frequent lightning, strong winds and even dust storms known as haboobs.

In Tucson over the year, Pelicans from the Sea of Cortez in Mexico are frequently blown off course and end up in Tucson, surrounded by the Sonoran Desert where they are captured and taken to the Arizona-Sonoran Desert Museum until they get enough and then the whole brood is flown back home in Mexico. Happily due to recent rainfall, fire restrictions have been lifted in Coronado National Forest and Saguaro National Park. The restrictions banning campfires and smoking in both areas have been in effect since the beginning of June. Coronado National Forest visitors are encouraged to practice fire safety and not to leave a fire unattended unless it is “cold to the touch.” Campfires can be built only in designated areas in fire rings or grills in Saguaro National Park. 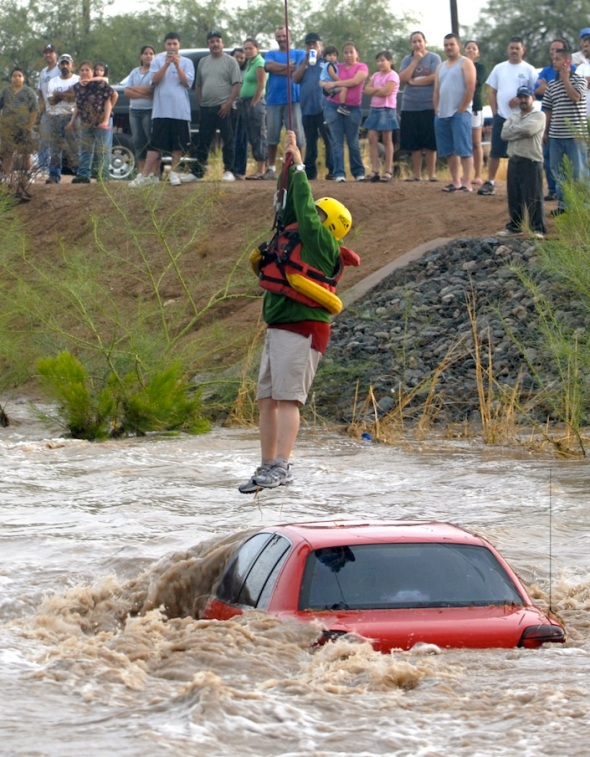 Her male companion swam to safety but rescuers dropped this lady a line from the extended ladder of a fire truck so she could be pulled from her car.

Because of the frequent whitewater rescues that ensue after every monsoon storm the Arizona legislature passed the “Stupid Motorist Law”, which corresponds to section 28-910 of the Arizona Revised Statutes, and states that any motorist who becomes stranded after driving around barricades to enter a flooded stretch of roadway may be charged for the cost of their rescue. The need for this law came from the lack of storm sewers in the deserts of the Southwestern United States, combined with heavy rainfall in the desert, usually associated with the summer. This lack of adequate drainage leads to short-term flooding. Many desert cities and towns don’t use culverts to channel minor washes beneath the roadway. Only major washes and floodplains have bridges over them. Consequently, during rain storms, storm runoff flows over the roadway. During hard, strong rain storms, the washes, underpasses, and large storm drains can flow fast and deep enough to pick up an automobile and carry it downstream. During particularly strong floods, one might see a motorist stuck in the middle of a wash, sitting on the roof of a dead car submerged to the windows. In such cases, if public emergency services (such as a fire department, or paramedics) are called to rescue the motorist and tow the vehicle out of danger, the cost of those services can be billed to the motorist, up to a maximum of $2,000…

Kelly Brittle hangs on to the roll bar of his completely submerged pickup truck stranded in the middle of the Canyon del Oro Wash. Forty firefighters and rescue personnel worked for 90 minutes before Brittle was pulled from the rushing waters. The 35-year-old man was suffering from hypothermia and listed in stable condition following the rescue by white water rescuers who shot a rope across the scene and pulled Brittle from his submerged pickup.

Hikers need to head for high terrain and should check weather reports before heading into canyons, particularly slot canyons in Northern Arizona. More than a decade ago, this coming august, eleven people died in a slot in Antelope Canyon, AZ. The hiking guide was the only survivor, stripped bare of his clothes by the screaming speed of the water, completely covered in bruises and left temporarily blind by silt trapped under his eyelids, Francisco “Pancho” Quintana would be the only survivor of the flash flood. The rest of the victims drowned, and all but one of the recovered bodies were found in Lake Powell, miles downstream. 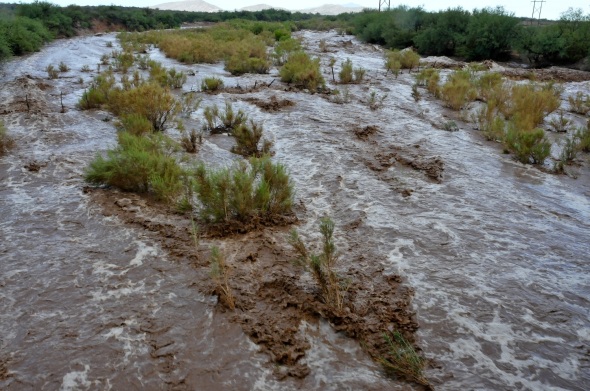 Kids playing in washes are at risk, motorist have been pulled from their vehicles and their bodies found miles downstream and some pulled from their vehicles in downtown Tucson have had their bodies recovered six months later when later storms removed all the sand and uncovers their bodies. About 75 percent of flash-flood deaths occur at night. Half of those victims die in automobiles. Many deaths occur when people drive around road barricades that clearly indicate that the road is gone. 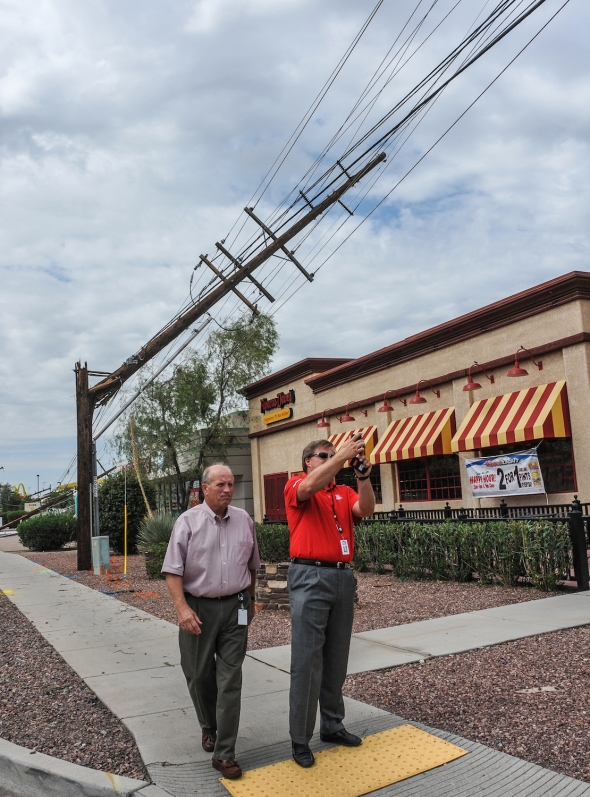 For extensive information, resources and data about flooding in the U.S. from the National Weather Service visit http://www.srh.noaa.gov/rfcshare/ffg.php for General Flood Preparedness before a flood during spring and summer when rain fall can be heavy and can produce flash floods in a matter of hours. There are a few common sense preparations everyone can take to reduce their risks from harm and property destruction. The following lists steps everyone can take to prepare for any type of flood emergency:
Protect your self for driving safety in heavy rain fall take note six inches of water will reach the bottom of most passenger cars causing loss of control and possible stalling. A foot of water will float many vehicles. Two feet of rushing water can carry away most vehicles including sport utility vehicles and pick-ups. A local auto dealer parts house will make $30,000 after a heavy down pour because motorists often run too quickly through flooded washes pushing water up into the engine compartment and blasting a hole through the engine block. Drive slowly and carefully. Flash floods occur within six hours of the beginning of heavy rainfall.

FLASH FLOOD SAFETY RULES
Get out of areas subject to flooding, including dips, low spots, canyons, washes, etc.
Avoid already flooded and high velocity flow areas. Do NOT attempt to cross flowing streams.
If driving, remember the road may not exist under flood waters. Turn around and go another way. DO NOT drive through flooded roadways! You could be stranded or trapped.
If the vehicle stalls, leave it immediately and seek higher ground. Rapidly rising water can engulf your car and sweep it away. Remember, it’s better to be WET than DEAD! Be especially cautious at night when it is harder to see.
Do not camp or park your vehicle along streams or hike along washes, particularly during threatening weather.
Children should NEVER play around high water, storm drains, viaducts or arroyos.

If you come upon a flowing stream where the water is above your ankles, STOP! Turn around and go another way. If water is moving swiftly, even water six inches deep can knock you off your feet.

Flash floods occur within a few minutes or hours of excessive rainfall. Flash floods can roll boulders, tear out trees, destroy buildings and bridges, and scour out new channels. Rapidly rising water can reach heights of 30 feet or more. Furthermore, flash-flood producing rains can trigger catastrophic mud slides. You will not always have a warning that these deadly, sudden floods are coming. Most flood deaths are due to FLASH FLOODS.

On July 16, 2012 The Arizona Republic-12 News Breaking News Team reported two people were injured after they were swept away by flash-flood waters at a stream near Sierra Vista just before 9 p.m., a 22-year-old man and 16-year-old girl were walking in the stream in the lower part of the Carr Canyon campground when a wall of water washed over them, says the Cochise County Sheriff’s Office. The water was from a torrential storm on the Huachuca Mountains. The man walked to a home along Carr Canyon Road and told the residents that he did not know what happened to the girl. The sheriff’s search and rescue team searched the area for the girl. Near morning, the Department of Public Safety helicopter found the girl on the north side of the wash less than a quarter of a mile downstream. Paramedics walked her out and treated her for mild hypothermia, cuts and bruises. The man was taken to the hospital and treated for cuts and bruises.

BE CAREFUL OUT THERE…

This entry was posted on July 19, 2012 by PK WEIS. It was filed under Uncategorized .