IAN MASON LED THE PARADE DOWN THE ELOY MAIN STREET

Mexico is marking the 202nd anniversary of the “Grito de Dolores,” honoring the call to arms made by the priest Miguel Hidalgo in 1810 that began the struggle for independence from Spain, finally won in 1821. The Mexican War of Independence was an armed conflict between the people of Mexico and the Spanish colonial authorities, the movement was led by Mexican-born Spaniards, Mestizos and Amerindians who sought for their independence from Spain but their rebellion against their colonial masters and soon morphed into a national struggle for freedom. EVERY YEAR, on the 15th, at 11 pm the President of Mexico goes out on the central balcony of the Mexican National Palace, rings the bell (the same bell Hidalgo rang in 1810) and cries to the people gathered in the square below, who enthusiastically respond “¡Viva!” 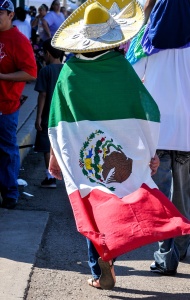 THE MEXICAN FLAG IS A CAPE ON MEXICAN INDEPENDENCE DAY 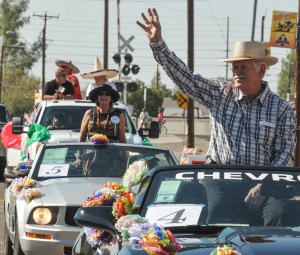 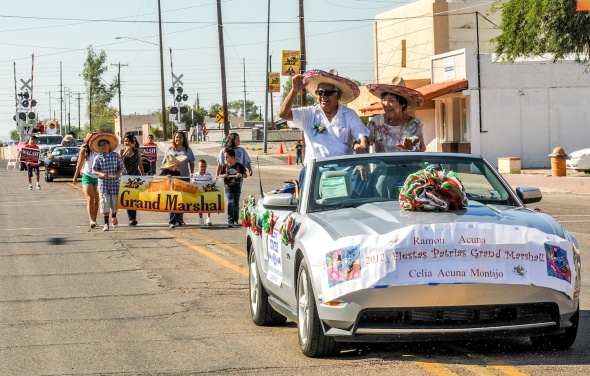 In Eloy Arizona, the Mexican Independence Day Parade runs late but begins with lights and sirens, a Eloy fire engine slowly turns on to Main Street headed north followed by the Santa Cruz Valley High School Marching Band whose nicknames are the “Dust Devils”…carrying the flags, cadets, Dominick Pefur, Ian Mason and Christine Krisen-Whetstone make up the Eloy ROTC Color Guard elite. Mexico City is the largest venue in Mexico for this celebration where thousands turn out for this famous parade, which features marching Army, Navy, tanks, cannon, helicopters on parade from every department in the Mexican Government, this annual parade reflects the health of the nation. 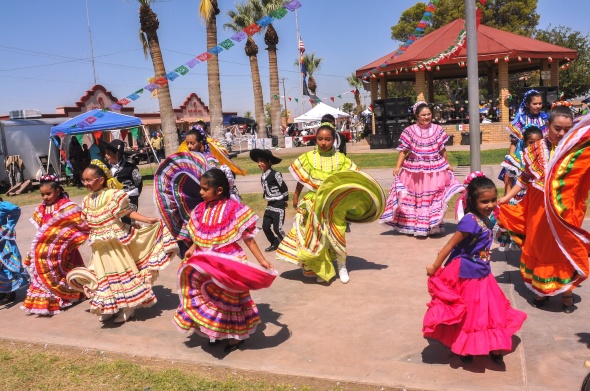 In Eloy, the Mexican Independence parade is all about local groups, some politicians, but most importantly it’s about family turning out to watch their babies take their place in the traditions of the community and in a sense, saying “Viva!” The Eloy streets are empty at 8:30am, a half hour before the annual parade Fiestas Patrias fires up around the corner on Third Street, where staging begins. As dancers, wipe sleep from their eyes, band members tighten their shoe laces-between Third Street and the High School lies Main Street Park where folks have been setting up food and drink booths. There families set up their lawn chair to enjoy the scene of their children parading up Main Street, just like they did when it was their turn. Now they watch and prepare the next generation for their turn at celebrating Mexico’s Independence Day, the homeland of the culture and for some, their family today. For years, the Eloy lettuce fields have attracted workers from all over Mexico–Eloy is better known in Mexico than many larger US cities. In Eloy today Mexican Independence Day is not about the thousands who turned out in Mexico City, it is about family, enjoying the traditions passed down over the generations and celebrating with family. Hotdogs, hamburgers, potato chips, cotton candy, fresh-squeezed lemonade and burritos in Eloy are the same as those found September 16 in Mexico is similar to July Fourth in the US.. 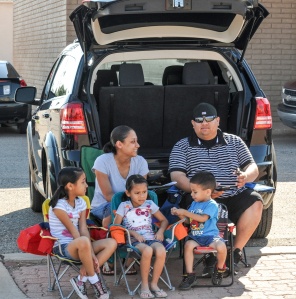 SOME FOLKS COME EVERY YEAR

There are rodeos, parades, bullfights, horseback rider performances and grand feasts. Statues in memory of Father Hidalgo are decorated with red, white, and green flowers. The Mexican Flag is made up of green, white, and red. The green represents hope, white is for unity, and red is for the blood of the national heroes. The crest in the center panel is Mexico’s coat of arms and portrays an eagle with a snake in its beak standing on a cactus.

After the parade, lots of folks stop by the Main Street Park and get something to eat from Ophelia’s whose Mexican food had the longest waiting line, they are either good or very slow ! The Mayor, vice-mayor, county official all spoke to the good people of Eloy, nationally known Sheriff Paul Babeu shook everyone’s hand and the padre blessed the crowd. High school mariachi bands groups serenaded the crowd, and the Amiga’s folkloric group prepared their charges to dance, all wearing blue tee-shirts with “Keeping Traditions Alive” printed on each back. Many of the young dancers scampered about the green grass, dressed in their long white slips–between costumes the girls frolicked until re-costumed. The older Eloy residents hung out beneath the shade of the mature trees covering the Main Street Park, the only green spot for miles in any direction, they had seen it all before and took the outing as an opportunity to catch up with folks they see less often.

Remember now if you’re not in Mexico, no matter where you are or what you’re doing, stop at 11 pm on September 15 and shout “¡Viva Mexico!” at the top of your lungs. Many voices will rise up and join you and you will be in good company, maybe, a hellva good party. Tequila! Please…!