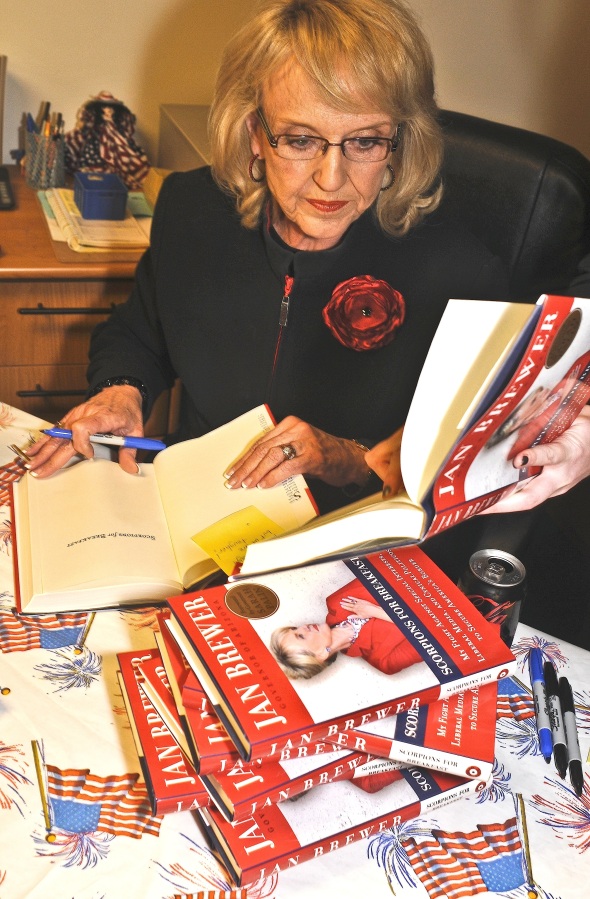 Settling in to sign books Jan Brewer spoke earlier of the emotional anguish she suffered at the hands of the federal government.

The Mental and Emotional anguish experienced by Arizona Governor Jan Brewer last year at the hands of the Federal Government who spurned her lawsuits to close the Arizona-Mexican Border to smuggling and illegal immigration. not to mention SB10-70, held up in court but channeled by a half dozen red states who too are being drowned by fed red tape, was the pain needed to get her to write her new book, “Scorpions for Breakfast”. Brewer who spoke December 13 in Tucson at Republican Headquarters, Fifth Street and Craycroft Rd, to a dozen interested fans. A half dozen members of Tucson TV media showed and but were not given the “Water-boarded” quote because Governor Brewer barred media from her opening comments where she spoke to staff and book buyers. The Governor was in a good mood, last week the Supreme Court had agreed to listen to Arizona’s lawsuit on the US-Mexico Border and SB-70 and Jan felt certain her vision would be upheld, attendees lauded her for her stand on ACCESS and eliminating “entitlements” which are stealing Arizona’s future says the Governor. 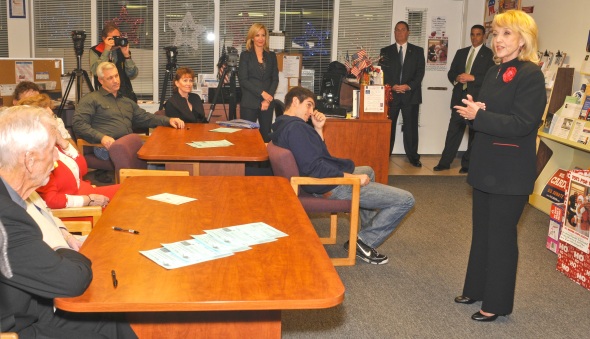 Jan speaking with the local supporters who came out on a dark, wet and stormy evening.

Amazon.com has 31 reviewers whose comments on reading SCORPIONS FOR BREAKFAST vary, here is my edit;

Scorpions for Breakfast gives a personal look at her political journey and the decision-making process to critical issues of the day. The subtitle for this book clarifies the focus of this book, “My Fight Against Special Interests, Liberal Media, and Cynical Politicos to Secure America’s Borders.” Call it “editorial license” or “dramatization”, but Gov. Brewers recounting of her Jan 09, 2011 State of the State address is certainly not factual. She did not lead the joint legislature in a moment of silent prayer, then look up defiantly and quote Isiah as she claims in the book. Following a standing ovation from her colleagues in response to her previous remark, she returns to her teleprompter and then makes her statement.

Jan really understood the issues, but did not seem to realize the amount of emotions SB1070 would instigate. The founded and unfounded emotions generated were obvious a surprise when one state tried to regain control of a growing problem.

Wonderful book about an absolutely incredible public servant and her fight to bring Arizona back from its abyss after the Napolitano administration and stop illegal immigration, which is one of the worst problems that our nation has ever faced. I admire Governor Brewer so much for her tough, can-do attitude. She always seems to do the right thing

I would strongly urge the people of America to read this powerful book written by a stand-up lady who sense of right and wrong is nothing short of admirable – quite unusual in a politician.

I ordered two of these books one for me and one for a friend. Both of us are members of The Tea Party. I have read this book and really enjoy what was wrote in it. It did open my eyes to some things I didn’t know.

The governor’s kvetching comes as she pats herself on the back for having the gumption to sign Senate Bill 1070, Arizona’s notorious “papers please” law, which alienated more than a third of Arizonans (the brown folk and those allied with them), turned Arizona into a national laughingstock, and most significantly for Brewer secured her win over then-Arizona Attorney General Terry Goddard in the 2010 gubernatorial contest.

In Scorpions, Brewer likens the criticism she took over signing 1070 to “water-boarding,” takes umbrage at getting called a “racist,” “Hitler’s daughter,” and “Satan’s whore,” and expresses annoyance at the protesters who dared harangue her at the state Capitol. Oh, and she really hated the drums that some anti-1070 protesters utilized. “They were there every day: marching, chanting, and beating drums,” she notes in Scorpions. “Always beating drums.”

I’m a big fan of Governor Brewer, but this book has really disappointed me. I expected her to dive deeply into her personal philosophies and thought processes, but these were touched upon only superficially. Unfortunately, this book is more like a campaign ad for her next election. I’m sorry I spent my time and money on this book.

Jan Brewer plays the role of ‘strong conservative,’ evidenced by her signing S.B. 1070. She waffled and delayed on signing, then finally did so when it became clear that Sheriff Joe would run against her in the primary, and win – if she didn’t. I like that she finally did sign it, but despise her having also pushed for a sales-tax increase recently to support local schools – the biggest ‘special interest’ and cause of high taxes in Arizona. Usually these books are written to boost support for higher office, but Brewer is going nowhere after this term is completed – I have no idea why this was written. It is simply a lot of puffery and hot air.

The night Jan came to town was a dark and stormy night and still a dozen people took the time to come to Republican Headquarters and say hello to the Governor of the State. It’s Christmas time, lots of Xmas Parties, cheer and good will, so maybe Jan thought her new read would make nice stocking-stuffers…Scorpions for Breakfast sells for $15.94 on Amazon.com priceded down from $25.99 and with free shipping. In comparison, Michelle Bachmann’s My Story is $17.51 and My Journey to the White House by Hermann Cain is marked down to $14.17. In comparison GABBY: A story of Courage and Hope hardcover sells for $17.81 but the kindle edition is $12.99 and thousands of folks filled Centennial Hall on the University of Arizona campus December 6th standing in line to hear Gabby’s husband Mark Kelly talk about writing their new book. The weather was also much better.

This entry was posted on December 17, 2011 by PK WEIS. It was filed under Uncategorized .