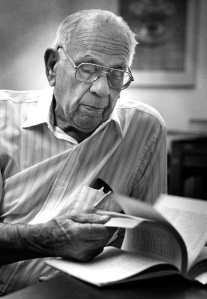 Emil Haury spent his entire adult life at the University of Arizona. He changed the name of the Archaeology Department, to the Anthropology Department at age 33.

THE STUDY OF TREE RINGS or THE ARCHAEOLOGIST’S TIME PIECE…wrote Emil Haury in his “PREHISTORY OF THE AMERICAN SOUTHWEST, in which he illustrates a new world order as seen by a man who spent his whole life piecing together the past. In his book Haury recounts the tale of HH-39, a tree ring sample which caused the most exciting day in his career when south west Prehistory stood still and then changed forever. Before the study of annual tree growth rings, or dendrochronology, archaeologist were unable to assign dates to the ruins of the south west. The discovery of three chunks of coal in a ruin near Show Low, Az in a single afternoon UA scientist Andrew Douglass dated 40 old villages occupied by the Pueblo Indian before the arrival of the Spanish. It was a contentious time in South West Archaeology, the Mogollon Culture controversy was raging through archaeological circles who battled over whether this orange pottery was a variant of the Anasazi or was it a distinct culture! Many archaeologist argued for greater study because they believed the known chronology was too short, others failed to budge and without actual dates, nothing was certain. Carbon 14 dates come in with a plus and minus ten or more years, most dates for the material culture known as Mogollon, had evolved into pit house villages around 1000 AD and later those villages grew into pueblos with connecting room blocks. Many archaeologist believed after 1000 AD there was a mixing of the Anasazi and Mogollon peoples who may have evolved into the Western Pueblo culture occupying large multi-story room blocks from 1200 AD into the post-contact period around 1500 AD. Early dates for the Mogollon were lacking, and without better data, many archaeologist found the Mogollon culture argument flawed.

At the same time tree ring studies were evolving alongside the archaeological scientific inquiry and archaeology student Joe Ben Wheat uncovered an orange pottery site with AD 350 tree ring dates just beneath the Mogollon Rim. No sooner had the skeptics requested tree ring dates, the archaeologist provided them, putting to rest a running battle that had made Haury’s life difficult for decades. 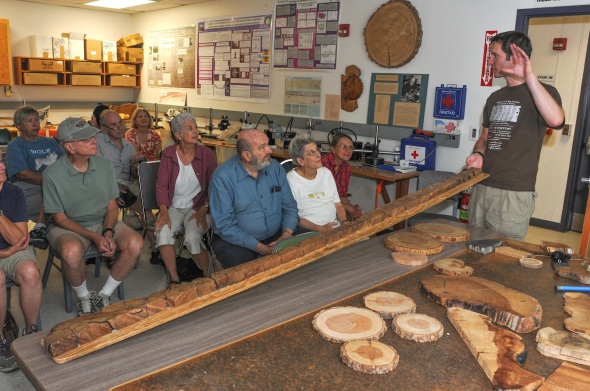 The Sequoia Tree is the largest tree in the world and yields a rich and large record of growth cycles in the California White Mountains. South West tree ring dates do not relate to the White Mountains of California, which has a different tree ring record. The above photo shows the radius of a Sequoia. 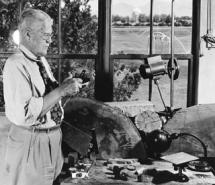 A.E. Douglass, founder of the University of Arizona Laboratory of Tree-Ring Research

Dr. Andrew Elliott Douglass, The Father of Dendrochronology, had developed this chronology for the south west extending from present to almost the time of Christ (AD11). “This record had a two-fold value for archaeologist”, wrote Haury in his Prehistory. “First it held the key for dating countless ruins and ruins yet to be dug, since this record can be consulted anytime. Second, it offers a record of weather, a story with years of drought and years of plenty, which opens up studies along ecological lines.” Douglass the astronomer believed tree rings could carry data concerning sun spots and by exploring that, he learned that tree rings tell much more.

Haury had given much thought to where to dig in order to find tree rings which everyone presumed could fill-in the gap and overlap the two known existing Douglass chronologies. On June 22, 1929 a work crew near Show Low unearthed three pieces of charcoal, HH-39 it was labeled, –it proved to be the bridge between Douglass’s prehistoric and historical-period tree-ring chronologies. Haury remembered the discoveries of that day as the single most dramatic event of his archaeological career; what follows is Emil Haury’s recollection of what was said by Douglass following his assessment of HH-39.

Three pieces of charcoal dug close to the surface at a Mogollon site near Show Low Az. These fragile specimens changed the direction of Archaeology.

“I think we have it. Ring patterns between 1240 and 1300 of the historic sequence correspond in all important respects to the patterns in the youngest part of the prehistoric sequence. This means that there was no gap at all. The overlap of the two chronologies was only 26 years and there was no possible way to join the two on the evidence we had. Beam HH-39 has established a bridge. “This was a moment of great Truth writes J.J. Reid in “Prehistory, Personality, Place” with Stephanie Whittlesey in his overview of Emil Haury’s career, “and at times like this, the truth sinks in slowly. No one spoke”, Reid wrote about the moment of discovery; “Douglass was busy making mental calculations, correcting his relative dates for ruins to the years of the Christian calendar. He broke the silence in his gentle way and told the spellbound archaeologists: “This means that Pueblo Bonito was occupied in the 11th and early 12th centuries and the other large ruins of Chaco Canyon were of the same age. The ruins of Mesa Verde, Betatakin and Keet Seel are mid-13th century.” Delivering at the same time, a new short course in South West Prehistory. The experience was unforgettable, said Haury, who cherished working along side Douglass, the scholar and the astronomer turned archaeologist.

For seventy-five years, The University of Arizona’s Laboratory of Tree-Ring Research has helped multiple-discipline scientists study mysteries in archaeology, ecology, geology and most recently in climate change. In 2007 a “transformational gift” from Agnese N. Haury, the widow of Dr. Emil Haury, who donated $9 million to construct a new building to archive the lab’s collection of millions of samples. The building will be named the Bryant Bannister Tree-Ring Laboratory, the former director of the Tree Ring facility, who still contributes to science. 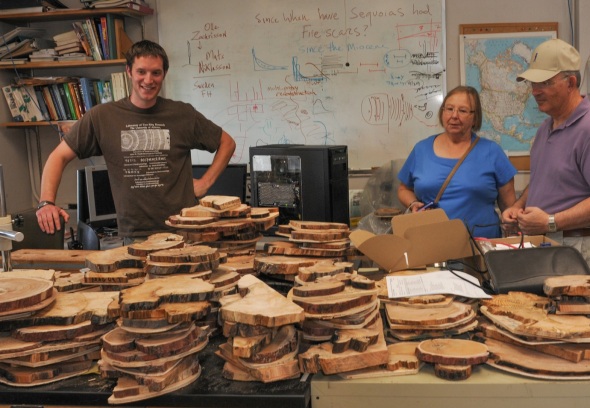 Chris Guiterman with a 700 year old tree ring chronology he collected during a recent Siberia visit.

Guiterman, is one of 19 graduate students in Tree-Ring Studies, he graciously gave us the walking tour of the largest and oldest tree-ring facility in the world. Guiterman’s office lies behind one of the many nondescript doors in the guts of the UA Football’s West Stadium where the tree-ring lab has called home for 75 years. Wood cross-sections are stacked high on his desk. This is Guiterman’s recent tree samples collection from Siberia this summer, where he was able to amass a 700 year chronology which will advance climate studies around the world. “We make sanding a fine art”, he says about the practice of reducing the wood until microscopes reveal the hidden rings. Guiterman says such detail can show growth signatures, showing which side of the mountain this tree had grown or visualizing the new growth each season or fire scars also seen in the ring. 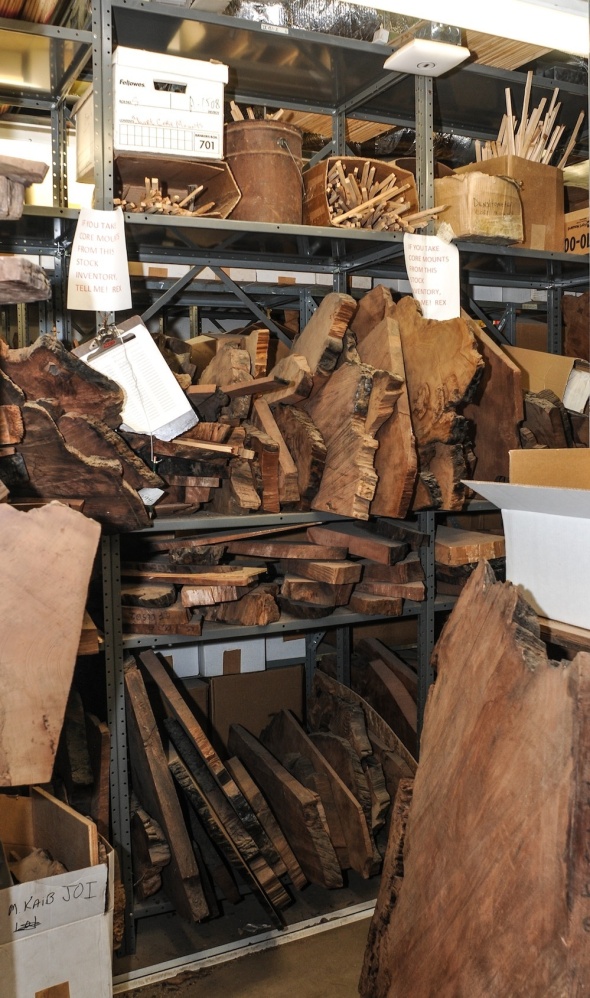 With new resources, more and more of the collection data can be digitized. The Tree Ring Bulletin can inform scientist worldwide on the web.

Each specimen carries a code which locates the site, the collector, the date

Douglass’s tree ring study has a distinct footprint limited to Mesa Verde to the north, Prescott on the West, Globe to the South and Pecos National Monument that lies north and east of Sante Fe, NM. Ironically there is little wood in Southern Arizona that can be dated without carbon 14, few tree species there yield good tree rings, but the Ponderosa Pine, Douglass Fir, Singlemann Spruce, and Aspen found in the Sky Islands and some Scrub Oak and Juniper can be dated in the high desert. The Saguaro has no fingerprint.

Chris holding a saguaro footprint which has no rings.

Was the abandonment of South West in 1200 AD a failure of the monsoons to form? Guiterman says the lab has begun the “Monsoon Project”, where data technicians are digitizing tree ring data by inputting (clicking on each ring) the growth cycles on tree ring specimens and their relative size collecting a history of wet, dry, fire, lightning, all data to feed studies from Archaeology, Arid Lands, Ecology, Biology, Geography, Geology, Forestry, Hydrology to name but a few. As the data is digitized it will be hosted online and made available to scientist around the world. The Lab long-ago realized tree ring dates alone held interest and have broken out all dates for the Tree Ring Bulletin, which monthly informs those interested in dendrochronology or a tree-ring public of any new contributions and possibly new data, rather than waiting for archaeologist to publish their findings, new tree ring dates are released quickly. Meanwhile, classic mysteries like “why did everyone leave ?” Might be answered in crunching the numbers. 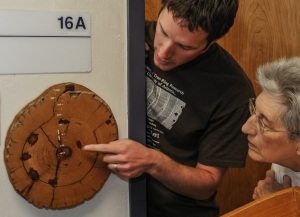 Meanwhile our tour walked through numerous rooms set aside for the deposit and curation of large chunks of wood, some chunks from the oldest ever known tree, which the park service harvested for its tree rings not knowing it was the world’s oldest tree. Hanging on the wall, next to a doorway, hangs the oldest known tree ring 180 BC. Elsewhere we walk past log ends broken by stone axes, beams from pueblos and wood samples of every kind, collected from every end of the Earth. “Institutional knowledge” was the best description for how things were filed or salted away, each piece is coded by collector, location and collection. Dendrochronology has been so refined that scientists can now recognize “signatures” which give away where the sampling grew up, into a tree, the Flagstaff signature, is well known in Arizona. 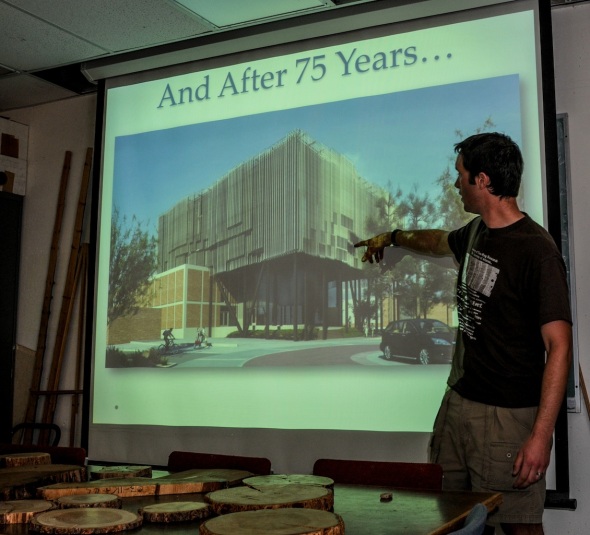 The building itself will be occupied in January, it was designed to look like a tree house with a block of offices and laboratories suspended high in the air at the roof level of the present Math East building. The offices are screened by individually articulated metal tubes that resemble the leaves of the Palo Verde tree. The main trunk beneath this block contains public exhibition space and the multi-purpose room that serves as auditorium and teaching lab. The Laboratory of Tree-Ring Research now houses approximately 2,000,000 wood specimens and their associated records, photographs, analyses, etc. As the oldest dendrochronology laboratory in world, the collections are unparalleled in size and diversity and has been built over the past 100 years. The new building will provide space for another 100 years of collection.

READ MY RINGS: THE OLDEST LIVING TREE TELLS ALL….Sheltered in an unremarkable grove near Wheeler Peak, California the bristlecone he had cut down was found to be nearly 5,000 years old, taking root only a few hundred years after human history was first recorded.