THE EPIC 24 HOURS in the OLD PUEBLO MOUNTAIN BIKE RACE TEST THE METTLE OF THE BIKER AND THE METAL OF THE BIKE, COMPETING RIDERS CUTOFF AT 1875 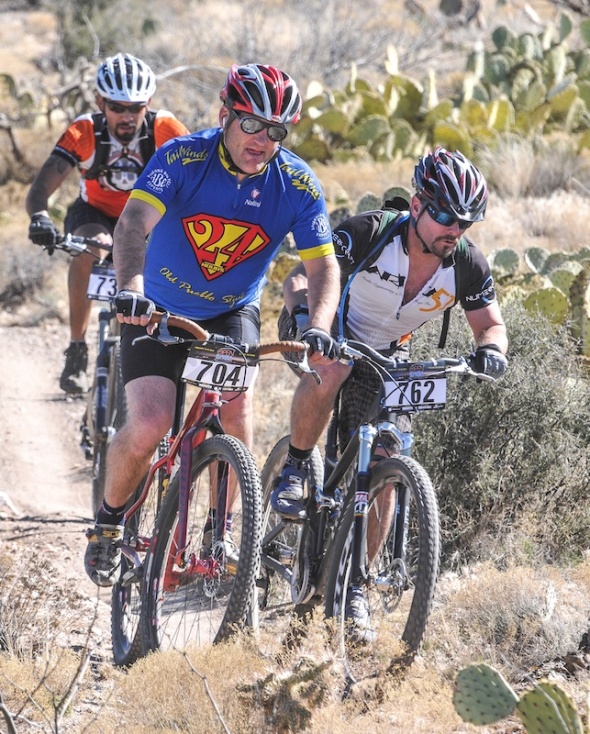 PASSING ON THE HIGHPOINT TRAIL TAKES A LOWER GEAR

THE EPIC 24 HOURS IN THE OLD PUEBLO MOUNTAIN BIKE RACE, has grown into a world class event, pulling in bike riders from all over the Unites States, Canada, four riders from Italy and raised 5 tons of food for the community food bank points out Todd Sadow, the 24 Hour event director. Weather makes Southern Arizona great this time of the year but in the fourteen years since 24 Hours began, several years were wet and muddy which produces grumpy riders. Many other years were a mix, some much colder, others not so, one year it rained all weekend. The 2013 24 Hours Bike Race was perfect.

HELMET CAMS ARE THE RAGE

RIDERS STACK THEIR BIKES CLOSE TO THE START 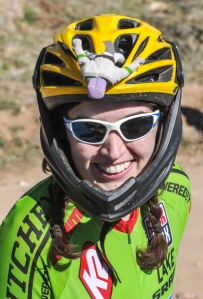 COMPANY FOR THOSE LONELY NIGHTS 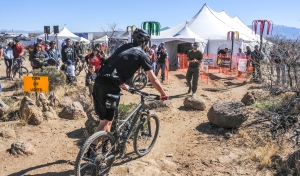 Seat down meal or a quick bite, or a coffee to go…

RUNNING DOWN THEIR BIKES

Bikers set up camp Thursday in 24 HOUR TOWN which has its own radio station K-EPIC 105.7 FM, tee-shirts, ball caps, the SW Best BBQ for Tri-Tip Steak Sandwiches and Blue Banjo Breakfast burritos, for caffeine, Peddler on the Path, offered both espresso and coffee. To sit down and enjoy sauteed mussel and shrimp dishes, both meat and vegan meals are available from the Chef’s Kitchen run by the Cryderman family who offer a host of savory dishes. Rules for 24 HOUR TOWN, is simply, BE NICE, HAVE FUN AND DON’T HARSH THE MELLOW. The Pinal County Sheriff has a whole list of other rules, but they were there to protect the public welfare or watch the mellow, everyone appreciates their help making the event safe and successful. The orientation ride for the newbee’s was led by Rebecca Rusch, the “QUEEN OF PAIN” who holds three 24 Hour Solo World Champion and four-time Leadville 100 winner. It was recommended as a good way to learn the course. Fires were small and contained, propane was big for heat but body heat was the recommended to minimize the impact on the Willow Springs Ranch where the race is held. Campers tents, cars BBQs were all packed in tight with only inches between each other, attempting to stay within the open space available without killing more desert. I met riders this year from Oregon, California, New Mexico, Texas, Colorado, from all over Arizona and Tucson. Riders wanting to race were cutoff at 1875 riders, walk-ons if they had not preregistered, could not race. I met a 34 year old Junior High School Principal named Ryan who flew in from Wisconsin to Tucson with his buddy and their bikes to race, and they couldn’t race but they rode the course prior to the race and slept in their car, rather bother coming back to Tucson and bed, “this is where we want to be he reported”. They were having fun anyway, “Mountain Bikers are much more outgoing folks” says Ryan, “Roadies or road racers, stare at the ground and say nothing to nobody and are competitive as hell, all about winning”. Mountain bikers are all about having fun, their campground-city 24 HOUR TOWN is jammed together into the smallest footprint possible, with trailers, winnibagos, fith wheel campers, car camps, cactus, canopies and trucks, plenty of cholla. At noon on Saturday everyone heads down to the start line where all riders have stashed their bikes on racks, afterwards the riders walk about 400 yards down the road where 1800 riders will get a Lemans-style running start, initiated by a 12 gauge shotgun. There are solo riders who will be seated on that bike seat for almost 24 hours straight and there are teams, many 4-5 riders each who will pass the baton to each other off and on for the next day. Either way, many have decorated their helmets with lighting, cholla-preventers, web cams (front and back), dolls and dinosaurs and beer cans, and all have lighting on their bikes. Many participants have raced at the 24 Hours before, but many confessed to being newbee’s, all were ready and excited. Four teams were made-up of Tucson youth aging between 12-18, and all twenty-five riders are driven bikers called El Grupo Youth Cycling and winners already, I was told there is “a bad-ass or two” in that group. After the huge start, I headed over to the end where the riders descend a rock face to time out for the lap of 16 miles around Black Mountain, 40 miles north of Tucson, in the pristine Sonoran Desert.

When the leader started down the rock, Ryan pointed out he was a pro rider who lived in Wisconsin during the summer and in Arizona in winter, his lap had taken around a hour, twenty minutes. By noon on President’s Day this city of 4,000 will have disappeared without a trace. Except for the $20,000 raised for the Bag-it Charity and the four to five tons of canned food raised for the Community Food Bank, this event brings quality athletes into the South Western United States and brings big tourist dollars to communities nearby like Catalina, Oro Valley and Tucson. Many 24 Hour in the Old Pueblo participants were riders from Tucson, most of them knew that the Old Pueblo, is what Tucson was called in its earliest days during the 1700’s… 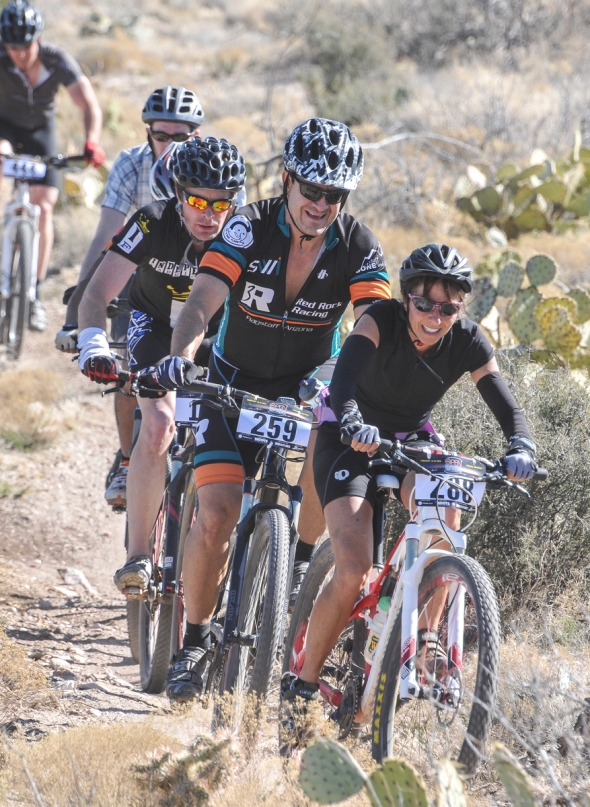