THE ALASKA RAILROAD’S TALKEETNA-TO-HURRICANE RUN OFFERS GREAT SCENERY– AND WHERE ELSE CAN YOU FLAG DOWN A TRAIN ?

TALKEETNA, Alaska -This is a train trip that can hardly rival the Siberian Railway, the Orient Express or any of the world’s other great rail journeys. After all, this is a trip that’s only 54.7 miles long.

But incredible scenery is the attraction on the Alaska Railroad’s local flag stop service that will carry people, luggage, camping supplies, building materials and most anything else you can haul aboard through some of this nation’s most isolated, rugged and beautiful land. 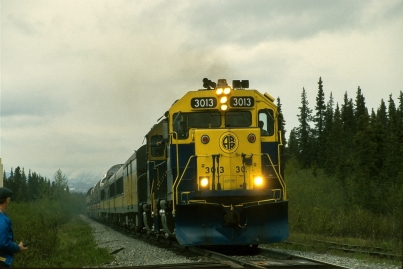 Alaska’s flag stop service is the only one in the country. Tell the engineer where you want to get off, and he’ll stop there – anywhere. Flag him down with a white cloth and he’ll pick you up on the return trip. It’s more like an intracity bus than a train.

But for people living in this area of Alaska, where there are no roads, no trails, no flat spots big enough to land a plane, it’s the only way in or out. 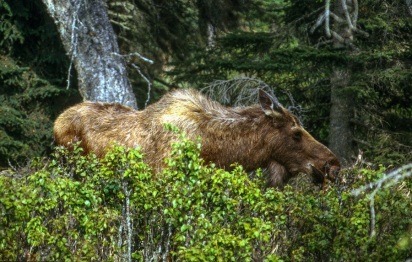 Tourists are welcome, but the flag stop service is mostly for locals and visitors who want to get completely away from it all for a few days. Ask conductor Gary Knutson if there will be any narration along the way, and he says, ”Once in a while someone will yell, ‘Bear!’ but that’s about it.” 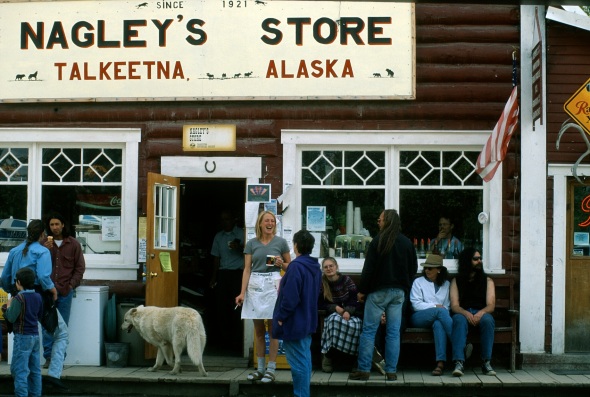 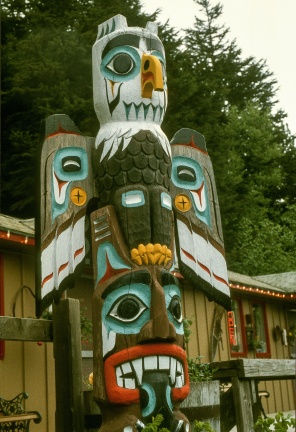 The route starts in Talkeetna, a 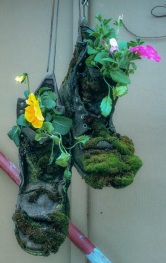 funky town of about 600 people (think Bisbee hauled about 2,900 miles north) that is the jumping-off spot for climbers determined to scale Mount McKinley, the highest peak in North America. The train turns around less than 60 miles north at Hurricane, nothing more than a train maintenance building.

The flag stop train is a one-car, self-contained, selfpropelled unit – a combination locomotive, passenger and baggage car in one.

Three-quarters of the trip parallels the broad Susitna River, which provides unlimited opportunities for hiking, camping and fishing.

Many of the visitors that ride the flag stop, hauling aboard enough stuff to equip a good-size sporting goods store, don’t really know where they want to go. ”They’ll ask us to drop them off at a good spot for fishing or whatever, and we usually have some suggestions,” said Knutson.

High school ROTC students  disembark  to live off the land.

On this trip, a squadron of Junior ROTC cadets from a high school in Hawaii were aboard with their leader, heading for a five-day wilderness experience. The leader had some idea where he wanted to go, and engineer Pete Hackenberger accommodated their request, stopping the train in what appeared to be the middle of nowhere as the cadets unloaded their gear and hiked into the thick forest growing right up to the tracks.

Hunter and guide Gary Prichard watches Alaska slip by the window as his dog Ginger enjoys the dry ride. Dropped off in the middle of nowhere, two Alaskan schoolkids (below) prepare to float 40 miles down the Susenta River to Talkeetna.

Despite ominous signs warning of federal laws forbidding passengers from entering the engineer’s compartment, operation of the flag stop train is pretty casual. Hackenberger usually runs the train in a ”uniform” of T-shirt and shorts during the summer, frequently bringing his dog, Bear, with him for company.

Hackenberger and Knutson know everyone who lives along the Talkeetna-Hurricane route. Several people who have built cabins far from any sign of civilization have used the train and another larger freight that plies the same tracks to haul in their homes, piece by piece. 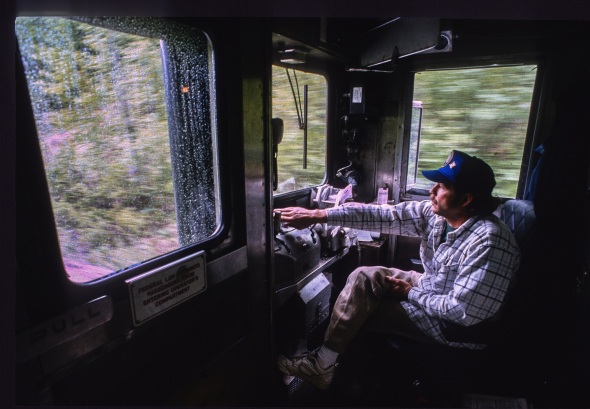 At one point along this run, Hackenberger slowed the train and sounded the whistle. A man emerged from the underbrush and Hackenberger waved and tossed him a pack of cigarettes as he went by, fulfilling a request from the day before.

”People are really nice along here,” Knutson said. ”You really get to know them. One guy flagged us down and gave us a covered skillet. It was filled with blueberry pie. So we ate the pie and dropped off the skillet on the next trip.”

On the way back to Talkeetna, three fishermen with their dog flagged down the train for a lift back to town. Hackenberger and Knutson climbed down to help them lift their equipment into the train.

‘No fish and you still have beer?” Hackenberger asked as he lifted a heavy cooler. ”You didn’t read the manual. We might not let you on.”

It is not unusual to see eagles, bear and other wildlife. On this trip, a large moose and her two calves bounded away from the tracks as the train approached. If the weather is good, there are spectacular views of Mount McKinley from the train.

”There certainly are worse jobs,” said Hackenberger. ”I think this is some of the most specular scenery anywhere.”

THE BEST WAY TO SEE ALASKA – IS BY ALASKA RAILROAD…

Flag Stop Service Schedule: During the summer, the train runs Thursday, Friday, Saturday and Sunday. Runs are far less frequent during the winter. The train leaves Talkeetna about noon and returns about 6 p.m. 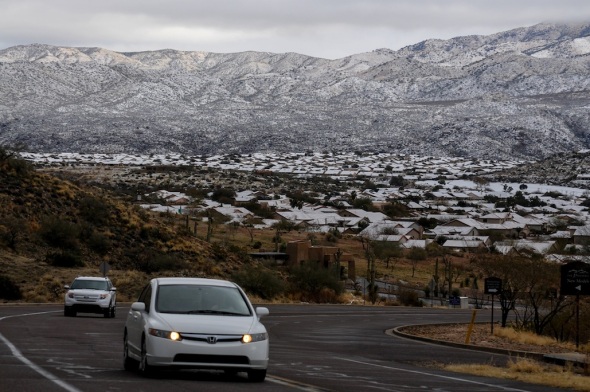 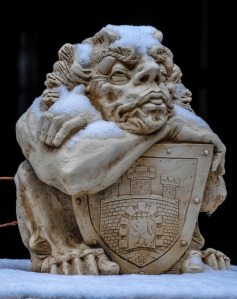 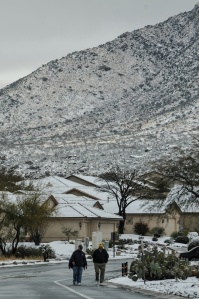 While the Northeast United States is digging out of three feet of new snow and a blizzard of historic proportions — across the great divide on the opposite side of the U.S. Tucsonans awoke to a frosty white deposit on all the mountains surrounding this desert community. The Catalina Range above 9,000 feet took the biggest hit with a fancy white shawl laced down to her foothills. More surprisingly, was the dusting left on the Tortolita’s, the Tucson’s, the Santa Rita’s and the Rincon Mountains all had deep deposits on their higher peaks. Much like the song about Camelot, the rain fell during the night and was gone by daybreak, snow on all peaks is a unique event particularly when the overall temperatures were already in the fifties. Clouds kept sunshine from attacking the snow until around noon when it popped out and the snow began retreating but not before the breaking up clouds allowed the sun to spotlight the peaks setting off their snowy lids against dark backgrounds. Saddlebrooke, Arizona recently was selected as one of the best retirement communities in the United States, particularly due to its setting at the base of the Santa Catalina Range not far from the University of Arizona’s BioSphere, City of Tomorrow. The snow was a big draw and brought lots of walkers out to stride around and check out what snow does when it falls on the desert. It is very textured experience and folks can be very impressed, most remembered winters back east like today which has seized the entire eastern seaboard, shutting down businesses, keeping folks at home, stopping the trains, buses and more than 5,000 air flights. Today the east coast is paralyzed, highways shut down, folks are stranded, some without phone and power lines are down and people are again without heat and lighting–today in Tucson the sun showed itself around noon, warmed up the land and melted away all the snow. There was nothing worse back in the mid-west, three months into a long winter with the black dirty snow stacked against curb and at times in the middle of the streets and knowing you would be climbing over that ugly snow for weeks, except when it would melt quick and refreeze as a invisible glaze–that’s when things really got fun. Southern Arizona was magnificent this morning, the air was so clear you could see forever and by afternoon, it was just beautiful.

Catalina State park received close to an inch of rain and flurries of snow.

Southern Arizona’s Sky Islands are frosted over for the 2013 New Year and new storms promise to spread snow throughout the border regions of Arizona. Forecasts predicts more, Bisbee has 9 inches, Naco has 7 inches, Sierra Vista has 3 inches and Mount Lemmon’s hwy is now open to four-wheel drive, and is a good place to screw up a nice 4×4, all that traction on ice…?
“It’s beautiful”, says a photographer at Catalina State Park, who has pulled over off the roadway to make a photo. Another lady stopped and rolled down her window, if the ranger sees you stopped on the shoulder, he will ticket you for being off road. Thanks I say as I pull away, that’s total bullshit I think.

SNOWBALLS ARE MEANT FOR LITTLE BROTHERS

In the forest north of Greer AZ daisy’s have taken over the meadows and add a great splash of color in anticipation of the leaves changing colors.

Seems like the leaves are turning much earlier this year. Flagstaff might peak between October 10-17 while the White Mountains may better be viewed around the middle of October. The weather has been perfect– cool, but not freezing nights coupled with warm sunny days produce optimum leaf color. Aspen color is still spotty but should be showing well on the high trails this week and next in the FLAGSTAFF area and the annual colors are coming a little slower in the WHITE MOUNTAINS.

In the Alpine and Greer area nights have been 40 degrees with highs around 75 each day, the monsoon has ended and the afternoon rains have slowed. In short, the weather now is perfect. Time to enjoy the fall, the light has changed and now the days have begun to grow shorter by getting light later and the sun setting earlier, still the time to camp but it’s perfect campfire weather. Many of the White Mountain communities have festivals, cars shows, art exhibits, sales planned to attract flat-landers into the mountains for the annual exodus to escape the desert heat and see the golden leave change.

Many a Sunday evening in October I-17 from Flagstaff to Phoenix is a sea of tail-lights as Phoenicians navigate bumper-to-bumper traffic all the way home from Flagstaff when the weather finally changes. Not all Phoenix tourists make it all of the way to Flagstaff or Williams, many are content to hang-out, in Sedona’s Oak Creek Canyon t 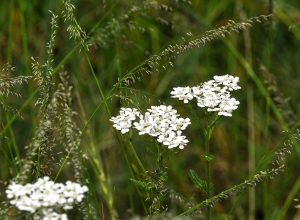 here fall colors show itself closest to Phoenix, but that also means it is the most crowed and you have folks stepping all over you. At the peak Flagstaff’s Hart’s Prairie Road is the best drive to view the change and further east the Hanagan’s Meadow area south of Alpine, AZ will host many a nice view of Aspen golden glow.

Helldorado Days OCTOBER 19-21 2012 Helldorado Days in July 1881, a disgruntled miner writes the Tombstone Nugget newspaper stating that instead of finding their “Eldorado” of riches, many men ended up washing dishes or other menial jobs, finding instead, their “Helldorado”. The term stuck. Helldorado is Tombstone’s oldest festival celebrating its rip-roaring days of the 1880’s. Helldorado, started in 1929, is sponsored by Helldorado, Inc. whose membership is composed of residents in Cochise County. Helldorado is held every third weekend in October and consists of gunfight re-enactment shows, street entertainment, fashion shows and a family oriented carnival. In addition, come and watch the Annual Helldorado Parade on Sunday at 11am… 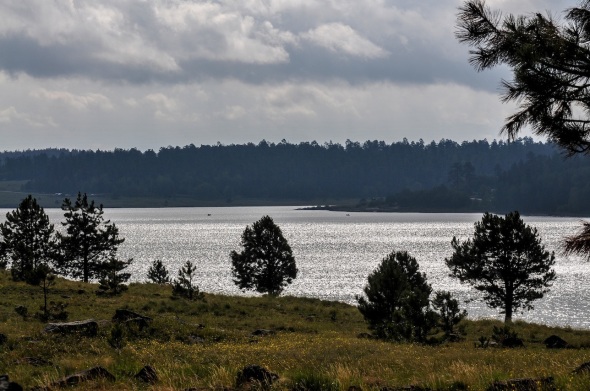