HISPANICS RISE UP OVER SB10-70 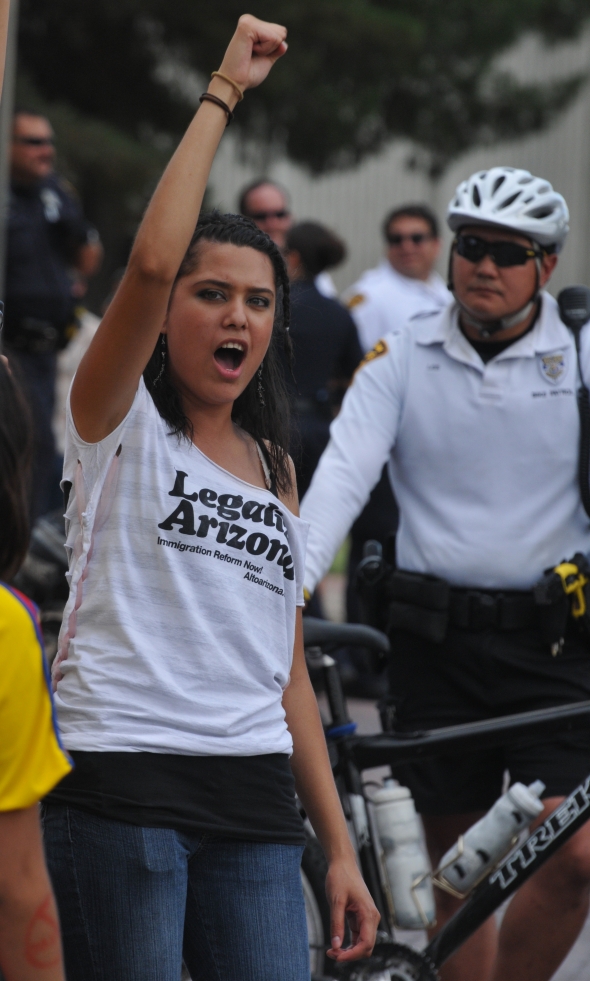 Maybe three hundred protesters closed Tucson Streets Thursday to show their displeasure in the new law many believe will cut severely into their civil rights particularly in Arizona. Hispanics fear walking out the front door and being deported to Mexico, insponse Hispanic have risen up all over the United Sates. Cities and States all across the United States have taken sides on the controversial law, many feel it is needed because of the lack of enforcement by the Feds, many residents fear they will no longer be free of the stigma of being a Hispanic.

TPD’s bikecops were very professional, well-trained and efficient Thursday as they setup a parameter with their two-wheeled squads and slowly regained control of the intersection which had been closed down at Rush Hour by Hispanic protesting SB10-70 going into effect. The specialty team, SWAT, was trotted in and out enmass to arrest and haul off these 95 pound civil disobedient individuals. When I arrived the last of 12 protesters was marched off surrounded by 12 big guys …so everything was calm and cool. The protesters seemed mindful of the news hour and most of the signs were gone by 6:15 pm. Last Thursday may have been one shot fired–but it was heard all around the world–Arizona’s Immigration Law SB10-70 has sent ripples far beyond the borders of this beautiful state. Estimates of 40 conventions who have canceled and estimates of $15 million, from folks who changed their minds and stayed home instead of traveling to the state of the bigot. Its hard to look at this any other way, when the Governor chooses to chase Hispanics from the state who fear walking out their front door. Meanwhile the Superintendent of Education Tom Horne is harassing La Raza Classes being held in Tucson schools and is trying to get elected as State Attorney General, while Jan Brewer, tries to become governor, all on the backs of the Hispanic population. I predict this huge shot of bad karma will blow up in their faces, lose their races, and slowly dropping completely off the face of the earth–never to be seen in ARIZONA politics again. Good riddance!

This entry was posted on August 5, 2010 by PK WEIS. It was filed under Uncategorized .